Even as the state government is pushing for projects like high-speed rail lines from Thiruvananthapuram to Kannur, a report tabled by the Railways Ministry in Parliament.

THIRUVANANTHAPURAM: Even as the state government is pushing for projects like high-speed rail lines from Thiruvananthapuram to Kannur, a report tabled by the Railways Ministry in Parliament made it clear that there are four projects, including the ambitious Sabari rail, struck midway after the state government refused to share the cost with the Railways. And these projects were given substantial allocation in the last union budget.

Among various projects that lie in neglect in the state, the 116 km Angamaly-Sabarimala project is high on priority as it will put the hill shrine in the railway map of the country if it is completed. According to Railway officials, the work on the 7 km Angamaly-Kaladi section is in an advanced stage. However it is stuck for want of 0.6 hectares of land.

For the remaining length, land acquisition has been delayed owing to local protests against fixing of alignment in Kottayam district. In view of considerable increase in project cost owing to abnormal increase in land cost, the state has sought their consent to share 50 pc of the project cost. However, the state is yet to toe the line of the Railways saying the project was conceived long before the cost sharing (51:49) agreement came into effect. Further, the Centre has the responsibility to bear the cost of the project as the hill shrine is a national pilgrim centre.

The doubling work on the 7.71 km-long Ernakulam-Kumbalam stretch, Kumbalam-Turavur (15.59 km) stretch, and Turavur-Ambalapuzha (50 km) stretch is hanging fire after the state government refused to bear half of the project cost. In both Ernakulam-Kumbalam and Kumbalam-Turavur doubling projects, the Railways has requested the state to provide free land and share 50 pc of construction cost in view of the considerable increase in project cost due to abnormal rise in land prices. However, the state government has not agreed to the Railways’ requests.

The Turavur-Ambalapuzha project has been deferred till the consent of the state government for cost sharing and providing free land is received, said railways in the report. Thiruvananthapuram railway division spokesperson told Express R K Kulshrestha, general manager, Southern Railway, who recently inspected the railway facilities from Thiruvananthapuram Central to Kottayam as part of the annual review of performance of Thiruvananthapuram railway division, had taken up the matter with the Chief Secretary last week and sought the intervention of the state government to solve the impasse, he said. 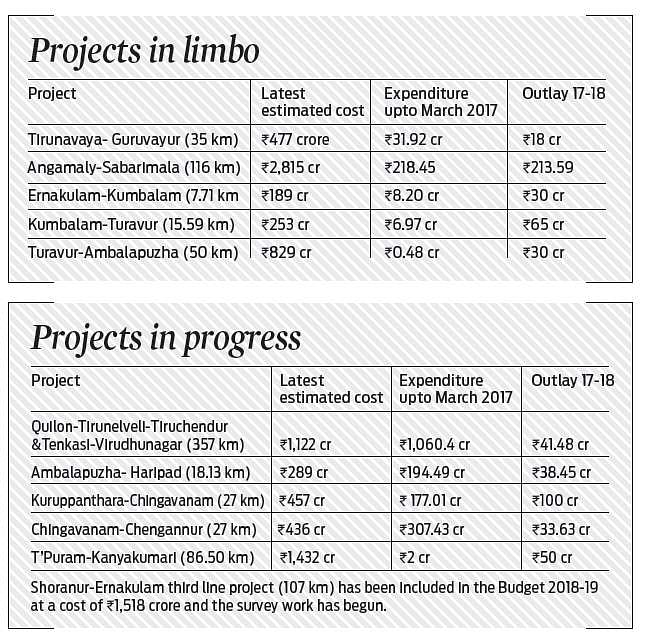