ALAPPUZHA: Jacobite Church Niranam Diocese Metropolitan Geevarghese Mor Coorilos has criticised some church members for “conducting hollow family meetings”.“I have decided not to attend family meetings of church members,” he wrote in a Facebook post. “Some of the families believe in fake myths that their forefathers were members of the Brahmin community and St Thomas converted them to Christianity. These kinds of false beliefs should be broken.” 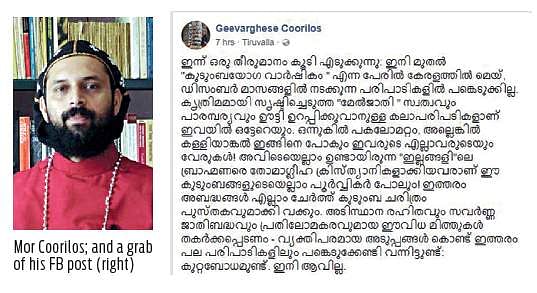 “The family meetings were planned to rivet the fake hereditary and ‘self-being’ of upper castes. They were preparing a book of family history to make these myths as history and it should also be re-examined,” he wrote.

“Many devotees are calling me ‘thirumeni’ and it is a word constructed to create upper caste feelings. So, I have decided to abandon that myth. Church members and the public can call me as friend, father or bishop,” he wrote.His post also invited a discussion about the upper caste feelings of some Christian families and groups.

Now we are on Telegram too. Follow us for updates
TAGS
Jacobite Church Mor Coorilos family meeting