KOCHI: Four more police officers, including North Paravur Circle Inspector, have been suspended from service pending inquiry in connection with the alleged custodial death of 26-year-old Sreejith, a native of Devaswompadam, Varappuzha.

C I Crispin Sam, Varappuzha SI G S Deepak, ASI Sudheer and senior civil police officer Santosh Baby are placed under suspension on charges of flaws in proceedings and dereliction of duty as per a preliminary inquiry conducted by the Special Investigation Team (SIT). 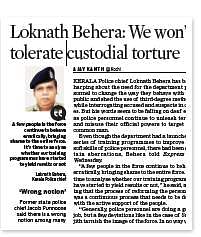 The preliminary report prepared by the SIT was submitted to the state police chief, who told Express the other day his department would not tolerate custodial torture.

The report recommended strong departmental action against the officers, accused of official misconduct.

"When Sreejith was in police custody for over 24 hours, the CI as the station house officer in- charge failed to mention the injuries sustained by the youth while recording his arrest or preparing the remand report. The action against other three officers are also recommended on account of committing lapses in reporting Sreejith’s worsening physical condition", said the report.

Earlier on Thursday, IG (Crimes) S Sreejith, who is heading the SIT, visited the residences of Sreejith and Vasudevan and recorded their relatives' statements. The investigators also collected evidence from the Varappuzha police station, where the deceased youth was kept in custody.

"A report regarding the initial lapses has been sent for the state police chief's consideration. Strong action will be initiated against those found guilty," IG Sreejith told mediapersons.

The department had earlier suspended three civil police officers, Jithin Raj, Santosh Kumar and Sumesh, attached to the Kalamassery AR camp, in connection with the incident, on account of official misconduct.

The scope of SIT’s investigation covers the attack on Vasudevan’s residence and his subsequent suicide, in addition to the alleged custodial torture of Sreejith and an assault case involving Divakaran, younger brother of Vasudevan. The SIT has already submitted a report to this effect at a magistrate court in North Paravur.

Kochi: Putting the police in a fix, the post mortem report of Sreejith has revealed the victim sustained serious injuries, pointing towards custodial torture.