A day after the date for the Chengannur bypoll was declared, the Left Front is a divided house over K M Mani.

THIRUVANANTHAPURAM: A day after the date for the Chengannur bypoll was declared, the Left Front is a divided house over K M Mani. The CPM and the CPI are in a direct confrontation over accepting the backing of Kerala Congress (M) to win the bypoll.The war of words among leaders over Mani progressed to another level with CPM state secretary Kodiyeri Balakrishnan brushing aside CPI state secretary Kanam Rajendran’s statement the LDF doesn’t need the backing of KC(M) to win the bypoll. In a sharp response, Kodiyeri further added it is not the privilege of any coalition partner to decide such things.

Cashing in on an opportunity, Mani too made a comment that Kanam was targeting two birds with one stone as the latter does not want the CPM to win.Meanwhile, Kanam later clarified his statement while daring Mani to secure a victory for the LDF candidate using his own influence.Inaugurating the DYFI’s head post office march in Kannur, Kodiyeri said, “The LDF can’t say that they don’t want somebody’s vote.” 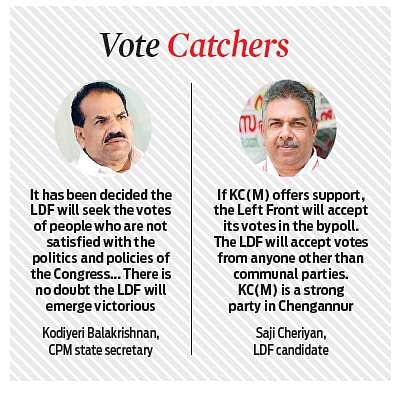 “The LDF policy is to garner as many votes as far as they are exercised against the UDF and BJP,” he said.
“It has been decided the LDF will seek the votes of people who are not satisfied with the politics and policies of the Congress. If Mani and KC(M) are dissatisfied with the Congress, enough facilities should be made for them to exercise their franchise against the Congress,” he said.“There is no doubt the LDF will emerge victorious in the Chengannur battle. The margin of victory will be even better than last time,” he added.

Later, Mani too attacked Kanam saying the CPI wants the CPM candidate to lose.“It seems Kanam wants the LDF candidate in Chengannur to lose as the latter belongs to the CPM,” Mani said, adding the CPM candidate had met him in person to request KC(M) votes.“The internal issues in the CPI might have forced Kanam to speak like that,” he said.

Soon, Kanam shot back daring Mani to secure victory for the LDF candidate using his own influence. “I do not think Mani is powerful enough to bring victory on his own.” he said.The CPI secretary, however, refrained from responding to Kodiyeri’s comment while senior CPI leader Binoy Viswam declared Mani a persona non grata in the Left Front as he represented despicable politics.

If Kerala Congress (M) offers support, the Left Front will accept KC(M) votes in the bypoll, said LDF candidate Saji Cheriyan.The LDF will accept votes from anyone other than communal parties. KC(M) is a strong political party in Chengannur, he added.

Now we are on Telegram too. Follow us for updates
TAGS
Chengannur bypoll Kanam Rajendran CPM CPI Kodiyeri Balakrishnan