The members had further stressed the need to put in place a system to hear their grievances and sought governmental support in addressing the issues that had plagued the industry. 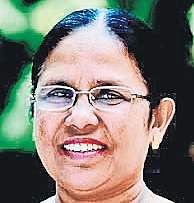 According to the minister, once there is any practical difficulty in constituting it, the government will weigh the idea of forming a government grievance cell. She further adds that a legal opinion has been sought in the same.

“The constitution of an ICC is mandated under the Sexual Harassment of Women at Workplace (Prevention, Prohibition and Redressal) Act. But the WCD Department will legally explore the constitution of ICC at film sets,” said Shailaja at a press meet here on Tuesday.

Regarding her meeting with the members of WCC, the minister said they had complained of inequality,
repression, discrimination prevailing in the Malayalam film industry.

The members had further stressed the need to put in place a system to hear their grievances and sought governmental support in addressing the issues that had plagued the industry.

“The state government is with the WCC. The government itself had appointed a three-member committee headed by retired High Court judge K Hema to probe issues of women in cinema, once it submits its report appropriate actions will be initiated,” Shailaja said.

Now we are on Telegram too. Follow us for updates
TAGS
Internal Complaints Committee Mollywood MeToo MeToo movement sexual harassment