Kerala: Campaigning for general elections at full throttle in Kasargod

Though incumbent MP, P Karunakaran is winning in the region for the past three general elections, the party has decided to field in KP Satheesh Chandran this time.

KASARGOD:  When UDF candidate Rajmohan Unnithan landed in Kasargod on March 18, he complained to media that he got his lunch at 5.30 pm. Sixteen days into the campaign, 5.30 pm has become his official lunch time. In one of the few seats the LDF is working on improving its winning margin and not just winning, Unnithan has an uphill task. He has already kind of discounted the Rahul Gandhi factor to help him sail through. Instead, he has fixed the CPM in his crosshairs. 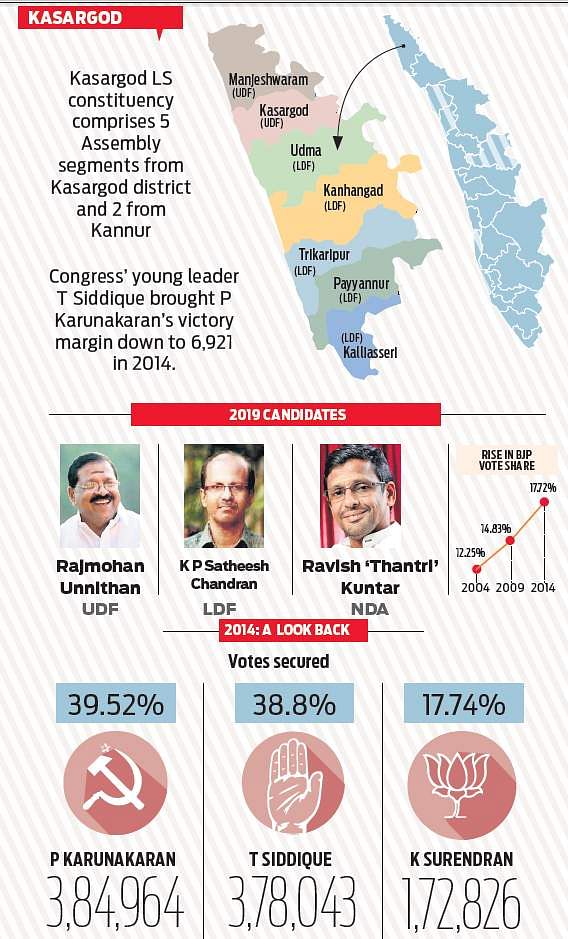 Thursday, he covered Udma Assembly constituency, which saw a pitched battle between Congress strongman K Sudhakaran and CPM’s farmer-leader K Kunhiraman in 2016. Sudhakaran bit the dust. Unnithan knows the story. At 10.30 am, he was at Delampady, a border village. He had to travel around 15 km in Karnataka to enter back into Kerala and reach Delampady. It is a pocket of the CPM but around 200 people had gathered at the junction to see him. “He is a crowd-puller,” said a CPM supporter.

Perched on the jeep and through the public address system, Unnithan did not pull any punches.  “For 35 years, the CPM represented Kasargod and turned it into a graveyard of development and martyrs’ monuments,” he said. “This time you should vote for development and a politics free of violence.” “We are not sure if he will get the votes,” the person quoted above said. It is hard to find voters without party affiliations in these areas.

From Delampady, he drove to Adoor, and then to Pandi, an area frequently raided by wild elephants. He took part in a theyyam ritual where around 2,000 devotees were present.  Nearly 40 km away, LDF’s KP Satheesh Chandran is campaigning at Moonnu Road, a tri-junction in Madikai grama panchayat. Except for one ward, which is with the BJP, the rest are controlled by the CPM. “The LDF MP has brought in developmental projects worth Rs 2,500 crore in the constituency,” he tells a gathering of 200 people, mostly women. He does not mention in the past 15 years.

When asked about the issues in the constituency, a lemonade seller who is doing brisk business, said: “There are no issues here. We don’t have the freedom to decide on issues. It is just one party,” he said.
Nisha, a young mother in the crowd, said the killing of the two youths was painful. “I don’t agree with it but it will not reflect on the voting. In a party, there are all kinds of people. Satheesh Chandran is not a person who endorses violence.”

NDA candidate Ravish ‘Thantri’ Kuntar’ is still in the first phase of his campaign. On Thursday, he picked Trikaripur Assembly constituency, where the BJP is the weakest. At 11 am, he reached Madakara, a fishing village dominated by the IUML. “Of the 17 wards in Trikaripur panchayat, the UDF wins only four seats. Madakara belongs to us. The rest is with the LDF,” says an autorickshaw driver who supported the IUML. “I can count the number of BJP workers in Madakara,” he dismissed the party.