The state-run pharmaceutical manufacturing firm aims to increase its production target by three fold in
the current fiscal by starting the production at the newly set up non-betalactam facility.

THIRUVANANTHAPURAM:  Competing with the multinational companies that sell branded medicines and grabbing a pie in the competitive generic market, Kerala State Drugs and Pharmaceuticals Ltd (KSDP), billed as the only state government-run pharmaceutical manufacturing public sector undertaking (PSU) in the country, registered a profit of Rs 2.75 crore by clocking a record production of Rs 58.37 crore and sale of Rs 54.93 crore (Incl.Tax) in the 2018-19 fiscal.

The KSDP achieved the feat for the second time in a row after a long hiatus by chiefly banking on the Health Departments functioning within and outside the state including Kerala Medical Services Corporation Ltd (KMSCL). Further, the company, which is known as the ‘kitchen of the Health Department’, is aiming to increase its production target by three fold in the current fiscal by starting the production at the newly set up non-betalactam facility. 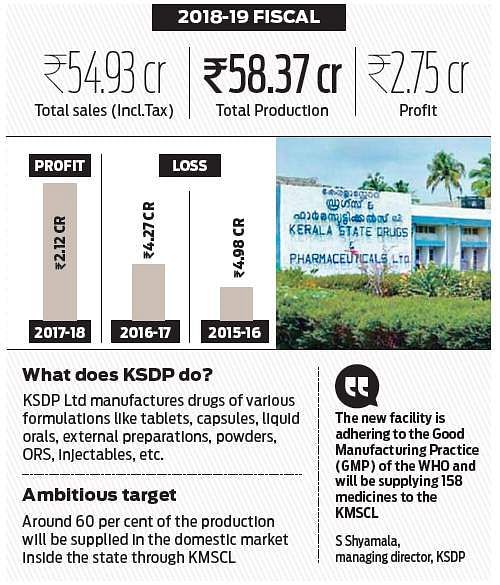 S Shyamala, managing director, KSDP, told Express that the new facility is adhering to the Good Manufacturing Practice (GMP) of the World Health Organization (WHO) and will be supplying 158 medicines to the KMSCL.

Around 60 per cent of the production will be supplied in the domestic market inside the state through KMSCL, while 30 per cent production to the markets in other states including Andhra Pradesh, Telangana and 10 per cent to foreign countries and open market.

With the operationalisation of this plant, the KSDP will be able to provide medicine to the tune of Rs 150 crore to the KMSCL, she said. Further, as many as nine medicines of the total 13 essential medicines required for the patients who underwent organ transplantation surgery can be provided at 10 per cent of its actual cost with the support of the state government. And the company has plans to manufacture four soft gelatin capsules required for these patients, she added.

Beginning operation in 1974, the sick PSU had ceased operation in 2003 and stared at a worst crisis after the implementation of the revised GMP standards for pharmaceutical industry in India in 2006, but regained its strength after launching a betalactam plant in 2011 adhering to the current good manufacturing practices to produces antibiotics, which was then followed by the launching of a advanced laboratory with NABL accreditation and dry powder injection plant in 2017.