The total aircraft operations for this period was 71,871 against 69,665 in the previous year

KOCHI: More than a crore passengers, mostly domestic, travelled via Cochin International Airport (CIAL) in 2018-19.  This is the second consecutive year that the airport has touched the crore mark, but a higher domestic transit is a first.

Out of the 1.02 crore passengers who travelled through CIAL, 52.68 lakhs travelled to domestic destinations. This is the first time in the history of the airport that the volume of domestic passengers surpassed the international. The total aircraft operations (number of landings and take offs) for this period was 71,871 against 69,665 in the previous FY.

To accommodate the ever increasing domestic traffic, CIAL renovated its terminal -1 with the state of the art equipment and hospitality services. The T-1 was put into full scale operation on 21st March 2019. As per the ongoing summer schedule the airport handles 1672 aircraft movements weekly. It offers direct connectivity to 23 Indian cities and 16 international destinations. 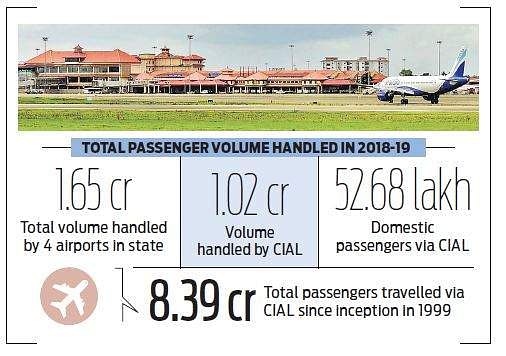 Now we are on Telegram too. Follow us for updates
TAGS
Cochin International Airport CIAL