The Kerala Self-Financing Engineering College Management Association (KSFECMA) alleged the state government did not extend any support to the colleges.

The Kerala Self-Financing Engineering College Management Association (KSFECMA) alleged the state government did not extend any support to the colleges.

“It’s true there’s a drastic dip in admissions. We had to stop many courses as branches like electrical and computer science, which were high in demand a decade ago, don’t have much takers. Hence, the AICTE has suggested beginning new courses, including in designing, which are more job-oriented. We’ll make some changes from the next academic year,” Madhu said. 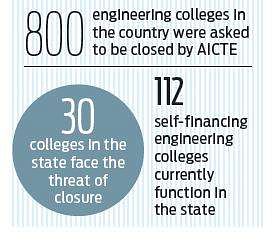