While TCC, KSDP, KELTRON and KSIDC raised their profits, Malabar Cements and SFIL made losses despite making gains at 2017-18.

THIRUVANANTHAPURAM: Giving an indication the performance of public sector firms has shown a marginal improvement in the just concluded financial year, as many as 17 public sector units in the state have registered operational profit in the financial year 2018-19 with a total operating profit of Rs 330.36 crore and a net profit of Rs 258.29 crore, against the Rs 330.5 crore operational and Rs 248.01 crore net profits recorded in the previous fiscal. However, the total number of PSUs clocking the net profit has slipped to 13 in the state against 14 in the previous fiscal. 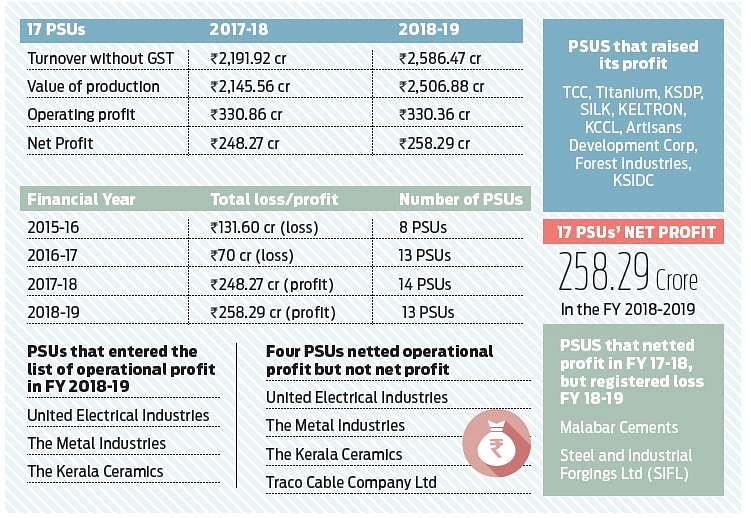 Further, two PSUs – Malabar Cements and Steel and Industrial Forgings Ltd (SIFL)- which have netted net profit in the last fiscal registered operational loss this year. Otherwise, the total number of firms that register operational profit and net profit would have made a jump from the previous year tally.

The flood has affected the operations of Malabar Cements for about one month and the administrative and management issues related to the PSU have pushed the profit making PSU to a sick entity in the last FY.

In the case of SIFL, the firm has manufactured components for train wagons anticipating the order of the Railways. But the Railways has made some changes in the specifications of the components which affected the performance of the PSU. However, the company management is in talks with the Railways to accommodate the same components as Railways was one of its clientele, said officials.

According to them, the PSUs in the chemical sector and electronics sectors have been doing well while the firms in the textiles sector have been faring poorly. At least seven PSUs can easily be brought to the net profit chart if the state government converts the loan given to various PSUs over the years into equity. The Public Sector Restructuring and Internal Audit Board (RIAB) has submitted a proposal in this regard and it is under the consideration of the state government.

Among the 17 PSUs which registered operational profit in the last FY, the highest operational and net profit was recorded by Kerala Mineral and Metals Ltd with net profit of R163.28 crore, while it was short of R18 core from the previous year. And the highest achiever was Kerala State Industries Development Corporation Ltd, increasing its net profit of R25.19 crore (2017-18 fiscal) to R34.89 crore in the 2018-19 FY.

RIAB chairman N Sasidharan Nair said with the end of the current financial year, the number of profit making PSUs will be increased to around 22-23 out of the total 40 PSUs in the state and the state government is working to this direction.