KM Mani: A champion of the cause of rubber growers in Kerala

Mani is accredited to have provided livelihood for around 10 lakh rubber growers, mainly banking on the exemption of rubber plantations from the purview of the Kerala Land Reforms Act.

THIRUVANANTHAPURAM: With the death of KM Mani, the rubber growers in the state have lost one of their finest champions, who is known by the moniker ‘Mani Sir’. Well known for his unique brand of political activism, Mani always took a keen interest in the issues of rubber growers.

The growth of Kerala Congress and rubber in Kerala was almost parallel. There was only one lakh hectare rubber cultivation in the state when the Kerala Congress was formed in 1964 and over the years, the area under acreage grew at a rapid pace with the extent of rubber plantation reaching a high of around 8 lakh hectares, providing livelihood for around 10 lakh rubber growers, mainly banking on the exemption of rubber plantations from the purview of the Kerala Land Reforms Act. 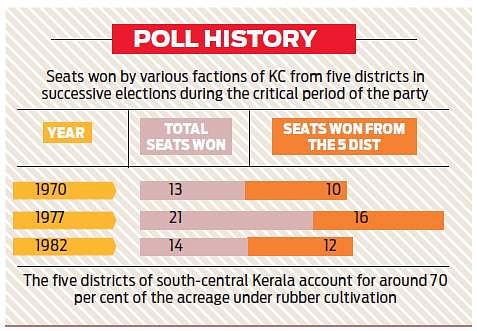 The astronomical growth of rubber cultivation, especially its geographical concentration, helped the Kerala Congress mobilise the farmers and ever since its formation, it has been assiduous in championing the cause of the rubber cultivators. Former Rubber Board chairman and president of Indian Farmers Movement P C Cyriac said it was Mani’s intervention which averted farmers’ suicide in the rubber plantation sector at present.

When the rubber industry witnessed an unprecedented uncertainty, he introduced the scheme providing a price stabilisation fund to provide a support price of `150 a kilo to the rubber farmers in 2015, which the LDF Government was forced to continue.

It was this measure alone that averted the farmer suicides in the rubber plantation sector, although the annual production of rubber nosedived to around 6 lakh tonnes from 10 lakh tonnes of late after farmers stopped tapping owing to the poor market, he said.

A mere look into the electoral fortunes of the Kerala Congress during the 70s, especially at the fag end of the 70s, during which the rubber cultivators and the Kerala Congress (M) expanded their domain considerably in the state, will point to the fact the party won the vast majority of its seats chiefly in five districts that account for the bulk of rubber acreage.

The five districts of south-central Kerala which accounted for around 70 per cent of the acreage under rubber cultivation had witnessed the people rallying behind the Kerala Congress factions, which won a majority of seats. This prodded the party to lobby for the farmers when there are sharp falls in the price of rubber.

When he leaves the stage, he not only leaves behind a vacuum in the political sphere of Kerala, but also the rubber growers have been rendered without a patron.