The 21-year-old was Kerala’s sole representative to the National Youth Parliament held in Delhi this year.

KOZHIKODE: Bucking the general trend of roping in household names to create voter awareness, Wayanad has chosen six ‘Ambassadors of Democracy’ from among its natives to impress upon the general public the need to take part in the democratic exercise, the biggest of its kind in the entire world.

The ‘Ambassadors of Democracy’,  include Baiju Sonia, a transgender who is a member of Kudumbashree ‘Rangasree’ actors’ group;  Krishnapriya Cheeral, differently-abled paediatrician; Cheruvayal Raman, 69,  farmer and  sole Indian representative to the 16th Congress of the International Society of Ethnobiology held in Brazil; Sajana Sajeevan, tribal cricketer under whose captaincy  Kerala U-23 women’s team won the 2018 T-20 Super League; A S Narayana Pillai, former freedom fighter who participated in the Quit India Movement and Joseph James, a first-time voter from Sultan Bathery. The 21-year-old was Kerala’s sole representative to the National Youth Parliament held in Delhi this year. 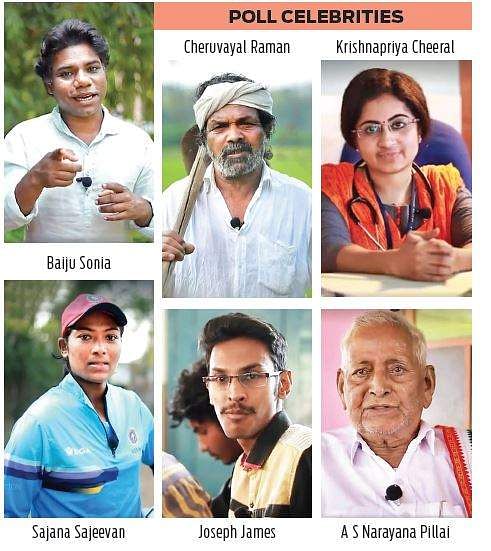 According to Wayanad Sub-Collector N S K Umesh, “Normally, celebrities and well-known figures are roped in to create awareness on elections. However, we felt choosing six of our natives, who represent various sections of the society, as ambassadors will create a bigger impact on people”.

As part of the ‘Ambassadors of Democracy’, the district administration has come out with videos on the lives of the six. Their profile and achievements are also being circulated on social media platforms. “They visit educational institutions and public places telling people the importance of voting, why they should be a part of the election and how to use EVMs. The doubts of voters are being clarified,” he said.
So far the ambassadors along with district administration officers have visited 15 colleges in Wayanad. They will visit the remaining colleges  by April 21.

On the experience of being chosen an Ambassador, Sajana, who belongs to the Kurichiya tribal community, said,“I’m extremely glad to have been selected as an ambassador. It’s the first time I’ll be voting in a parliamentary election. I  have visited two colleges, interacted with the students and urged students to show due diligence while cast their ballot.”

Now we are on Telegram too. Follow us for updates
TAGS
Ambassadors of Democracy