Poll officers have seized a total of Rs 6.98 crore in hard cash during raids conducted in the state  as part of efforts to ensure free and fair elections.

KOCHI: Poll officers have seized a total of Rs 6.98 crore in hard cash during raids conducted in the state  as part of efforts to ensure free and fair elections.

The EC’s total haul from the state, which includes liquor, drugs/narcotics and precious metals, is valued at Rs 32.24 crore.  But the seizure from the state pales into insignificance compared to that effected from other states like Tamil Nadu, Andhra Pradesh, Telangana and Maharashtra.

Gujarat topped the list in terms of the value of drugs/narcotics seized at Rs 524.34 crore whereas for Kerala the figure stood at Rs 21.54 crore. Regarding the liquor seized, Uttar Pradesh saw the highest seizure of 15.07 lakh litres worth Rs 41.64 crore.

In terms of seizure of precious metals also, Tamil Nadu had the dubious distinction of topping the chart at Rs  708.69 crore. Uttar Pradesh, where precious metals worth Rs 71.57 crore were seized, stands a distant second. 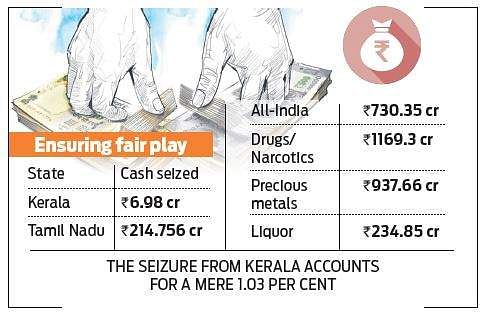 Now we are on Telegram too. Follow us for updates
TAGS
raid election raids Lok Sabha Elections 2019