The commission has demanded the presence of the proprietor during the sitting to be held at the Kozhikode Government Guest House on May 29.

THIRUVANANTHAPURAM: The State Human Rights Commission (SHRC) has summoned Suresh Kallada, the owner of Kallada Travels, in connection with his employees assaulting the passengers who travelled in his bus on April 21. The commission has demanded the presence of the proprietor during the sitting to be held at the Kozhikode Government Guest House on May 29.

In another directive, the commission asked the Kochi City Police Commissioner to depute an officer not below the rank of DySP to conduct an inquiry into the complaints against Kallada Travels. A parallel inquiry will also be conducted by the Transport Commissioner. It was while considering a complaint of Kozhikode native Naushad, the said instructions were issued. 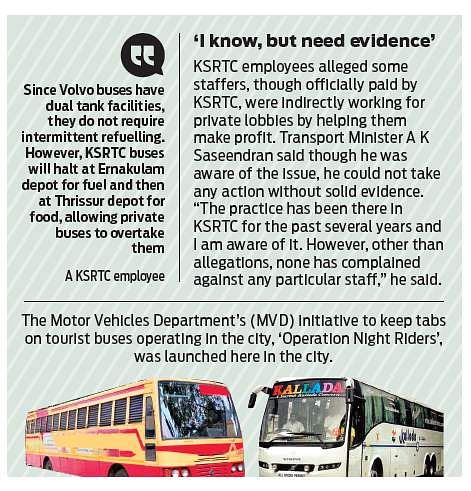 Following the attack on two passengers on board a Kallada  bus by the latter’s employees, the Motor Vehicles Department (MVD) has intensified action against bus operators running inter-state fleets illegally.

The MVD on Wednesday launched ‘Operation Night Riders’ to curb illegal bus services to and from the state. It has also decided to ban booking agents, who do not possess LAPT (Licensing of Agent for Passenger Ticketing), from selling bus tickets.

Most luxury buses operating within the state and outside lack the stage carrier permit and ply using the contract carrier permit, which does not allow picking up passengers along the route.

However, legal action cannot directly be taken against bus operators as the tickets are booked by agencies, who, in turn, enter into a contract with the operators. It is in this backdrop that the MVD has decided to act tough against booking agencies. “Many booking agencies operate without the LAPT permit. They have been asked to produce the same, failing which they will not be allowed to operate,” said Joint Transport Commissioner Rajeev Puthalath.

The MVD has also taken action against around 58 buses for violating rules. Of them, 30 have been served stop memos while 28 were slapped with a fine of `40,000 each. Some of the buses were found carrying goods.

Kochi: An investigation team led by Thrikkakara ACP Stewart Keeler on Wednesday recorded the statements of two victims, Sachin and Ashkar, who were brutally beaten up by the Kallada Travels crew. The commissioner visited the victims, who are currently under treatment at Salem in Tamil Nadu. “As of now, only seven people have been arrested, but the investigation is progressing positively,” said Stewart.

As per the statements given by the victims, over 12 persons attacked them. The CCTV visuals have been examined and more suspects will be arrested soon. Meanwhile, Kochi City Police Commissioner S Surendran has summoned Suresh Kallada to his office to record his statement.

Now we are on Telegram too. Follow us for updates
TAGS
SHRC Kallada Travels Kochi City Police Kallada Passangers Assaulted