THIRUVANANTHAPURAM: A total of 9,975 people have benefited from the Kerala Literacy Mission’s three programmes to make Adivasis literate in the past two years. Compared to the 1,117 beneficiaries during 2015-2017, there has been a nine-fold increase in those who benefited from the programme. As per Mission’s statistics, of the total beneficiaries, 75.8 per cent are women (7,565). 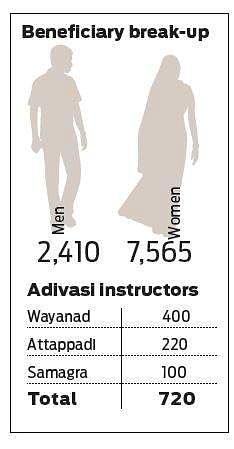 Now, the Attappadi Literacy Equivalency Programme with 1,763 ‘students’ has entered the third phase, while the Wayanad Literacy Equivalency Programme has entered the second phase with 5,342 students. Samagra programme has 2,720 students in the rolls taking the total number of people enrolled to 9,825. The programmes owe their success mostly to recruiting Adivasi instructors. All the 720 instructors were drawn from Adivasi community who speak the gothra languages.

According to a survey conducted by the Mission in 192 hamlets, there were 5,031 illiterate people in Attappadi. The first phase saw 1,117 beneficiaries, while the second phase had 2,553 beneficiaries, making 3,670 among them literate. Once the third phase is over the remaining 1,361 will also be illiterate.

According to Literacy Mission director Dr P S Sreekala, Attappadi can now be declared a completely literate block. At present, the literacy programme is active in Agali, Sholayoor and Puthur panchayats.

To ensure the smooth functioning of the project, organising committees function in the 200 hamlets with the representative of the respective local self-government body as the head.

Now we are on Telegram too. Follow us for updates
TAGS
Tribal Literacy Adivasi Instructors