32 years and counting: This robot has been performing aarti and puja since 1987

The processor exercises closed-loop displacement of feedback control for near 100% accuracy.

THIRUVANANTHAPURAM: Imagine this: A robot performing all the pujas and rituals to an Ayyappa idol in the same way a priest does in the temple! Now, suspend your imagination. For, this is reality. A reality that dates back to three decades much before Malayalees had come to terms with the word ‘robotics.’

You’ve got to hand it to V S Sabu, 58, who developed reportedly the first autonomous robot in the country in his R&D lab in 1987 for educational purposes. The invention was acknowledged and lauded by the office of the then Prime Minister Rajiv Gandhi and the Technical Department of Education, Kerala.

‘’I had no serious thoughts even then and now to commercially use its possibilities for religious purposes although the robot can perform all the rituals in a temple like performing arathi with incense to the idol, burning camphor, garlanding the idol, or lighting the traditional lamps and performing the arathi with lamps,” said Sabu, who has 38 years of experience in design, development and manufacturing apart from specialising in Robotics.

A diploma holder in Electrical Engineering in 1980 and certified in various technologies, Sabu learnt the basics of the programme language used for operating the robot from former VSSC engineer Sudhakar Rao.

He returned the gesture to the premier space agency later by developing a sign check fixture for ISRO in 2005 which is used as satellite equipment bay testing unit, and another prototype of rover robot for ISRO in 2009. M R Narayanan, former MD of Transmatic, had provided him with a Taiwan-made 8-bit microprocessor (Zilog Z-80), on realizing his interest in this field.

“I developed the robot weighing around 40 kg using scrap and other materials, including five motors controlled by the 8-bit microprocessor. The robot, with a rotational displacement of 280 degrees with lower and upper arms 180 degrees each, is capable of movement along five axis with five motors. The robot, which can be controlled manually too, has a load bearing capacity of 1.5 kg and accuracy of 98% with a power consumption of 150 watts. The processor exercises closed-loop displacement of feedback control for near 100% accuracy.

What’s more, the engineering showpiece is still functional in his R&D lab even 32 years after its invention and it’s a specimen to the engineering graduates in and around the capital city.

Further, he has a slew of achievements under his belt like developing the first ‘high tension mineral separator (static) lab for separating ilmenite and rutile from mineral sand employing a non-conventional technology in 2001 - an import substitution. Tesla Coil Laboratory Equipment which produces 5 lakh voltage), the prototype of omni directional wheel chair in 2010 and Jacob’s Ladder (high voltage) are some of the examples of his professional excellence. 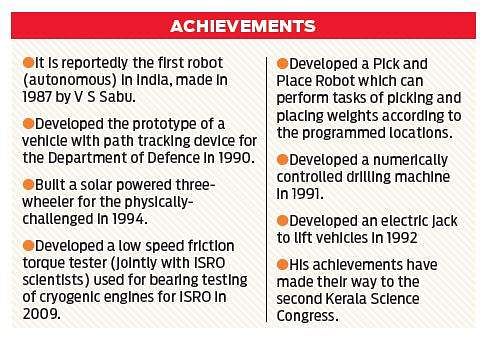 Now we are on Telegram too. Follow us for updates
TAGS
robot pujas Ayyappa idol