Meena on Monday confirmed bogus voting by three persons at the polling booth of Pilathara AUP School in Kasargod constituency during the Lok Sabha elections.

THIRUVANANTHAPURAM:  Chief Electoral Officer (CEO) Teeka Ram Meena on Monday confirmed bogus voting by three persons at the polling booth of Pilathara AUP School in Kasargod constituency during the Lok Sabha elections, while another bogus vote cast by a person is yet to be confirmed.

At a press conference at the office of the CEO here, he said after vetting the video footage and preliminary report submitted by the Kannur district collector, the commission found that three persons - CPM panchayat member Saleena N P, Padmini and Sumayya K P - had cast bogus votes at the booth.

While Padmini cast two votes in the same booth, both Saleena and Sumayya who had to vote in booth number 17 and 24, respectively, cast votes in booth number 19 of Pilathara AUP School. Further, it is suspected that one more bogus vote was cast by another person who reportedly accompanied a voter, he said. The presiding officer in the booth had also erred by going out of the way to help a paralysed voter to exercise his franchise. 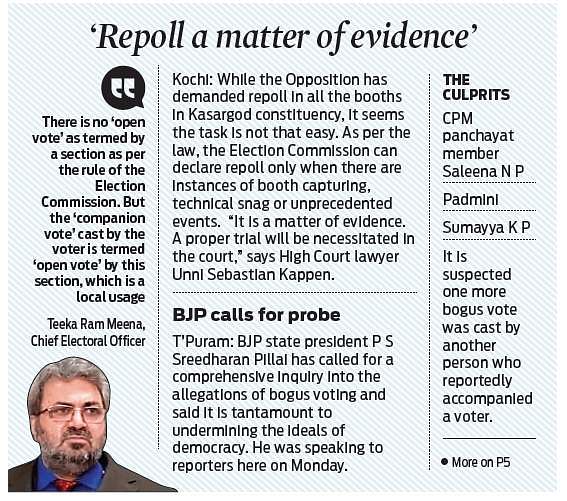 When the wheelchair-bound voter was brought to the booth for voting, the presiding officer went outside the booth to take his thump impression as part of verification, which is a violation of rule. The wheelchair-bound voter should have been brought inside the booth by the person who accompanied the voter. When the presiding officer went out, the suspected fourth case of bogus voting took place.

BUT it has to be verified by holding a detailed investigation, he said, adding, this is a clear case of violation on the part of the presiding officer and he will have to face action. Saleena faces disqualification as well as legal action along with the two other women under Section 171F of the Indian Penal Code, (punishment for undue influence or personation at an election), Section 171 D (personation at elections) and 171 C (undue influence at elections).

Further, the presiding officer at the booth will have to face action under Section 134 in the Representation of the People Act, 1951 (breaches of official duty in connection with elections), he said. Apart from this, the district collector has been directed to hold a detailed investigation into the incident and he will look into the role of polling agents in the booth, including the UDF agent who left the booth by 11 am after reporting in the booth in the morning.

When asked if re-polling would be conducted in the booth, he said he would send a detailed report to the Central Election Commission, who will take a final call on the matter. He also said there is no ‘open vote’ as termed by a section as per the rule of the Election Commission. But the ‘companion vote’ cast by the voter is termed ‘open vote’ by this section, which is a local usage, he said. The Election Commission is ready to hold an investigation in other booths if there are more complaints, he added.