KOCHI:  Rackets operating from the rural areas of Kerala and Tamil Nadu are printing a large number of counterfeit notes and are slipping them into the state system.

More worrying, the notes are mostly in the denomination of Rs 2,000 unlike Rs 500 earlier and their printing is of high quality.

The seizure of counterfeit currencies in the denomination of Rs 2,000 has increased in the state since demonetisation in November 2016. 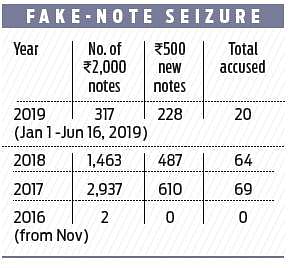 DIG (Kannur Range) K Sethu Raman said the quality of the seized currency notes proved they were printed using hi-tech machines from outside.

“We’re probing the case in detail,” he said.A senior intelligence officer told Express the seizure was just below 10 per cent of the actual number of counterfeit notes circulated in the state in the last two years.

“The risk of printing a counterfeit note is same irrespective of its denomination. So the rackets generally go for Rs 2,000. The printers are mostly imported ones,” the officer said. The data showed as many as 1,348 fake notes in the denomination of Rs 200 were also seized in the state during the above-mentioned period.

Kozhikode Rural Superintendent of Police KG Simon said the police were closely monitoring the development and probing the activities of the inter-state counterfeit currency rackets operating in rural areas of the district.

The state police have been able to track the activities of the inter-state rackets after two Salem natives were nabbed way back in 2017 from Mukkom in Kozhikode and the equipment used for printing fake currency was recovered. The members of the same racket were earlier picked up from Thrissur in May 2017 for possessing counterfeit notes to the tune of Rs 3 lakh in face value.

More from Kerala.
Now we are on Telegram too. Follow us for updates
TAGS
fake currency Fake currency racket Kerala counterfeit notes