Sister Lucy was warned for publishing a book, participating in TV debates, taking loan without seeking permission and publishing her articles in non-Christian dailies among several ‘wrongdoings.

KOCHI: Sister Lucy Kalapura, the nun who stood against Bishop Franco Mulakkal,  has been dismissed from Franciscan Clarist Congregation (FCC) for 'violation of norms of FCC'.

The decree of dismissal, issued by Superior General of the Congregation Sr Ann Joseph on Monday, came in based on the General Council held on May 11 this year.

The decree of dismissal, unanimously voted by the members of the Congregation in the general council, sent to the Congregation for the Oriental Churches in the Vatican through Nunciature in New Delhi was approved by the Holy See on Monday.

In the letter, Sr Ann said that "You were given the required canonical warnings, however you did not show the needed remorse and you failed to give a satisfactory explanation for your lifestyle in violation of the proper law of the FCC," said the letter. 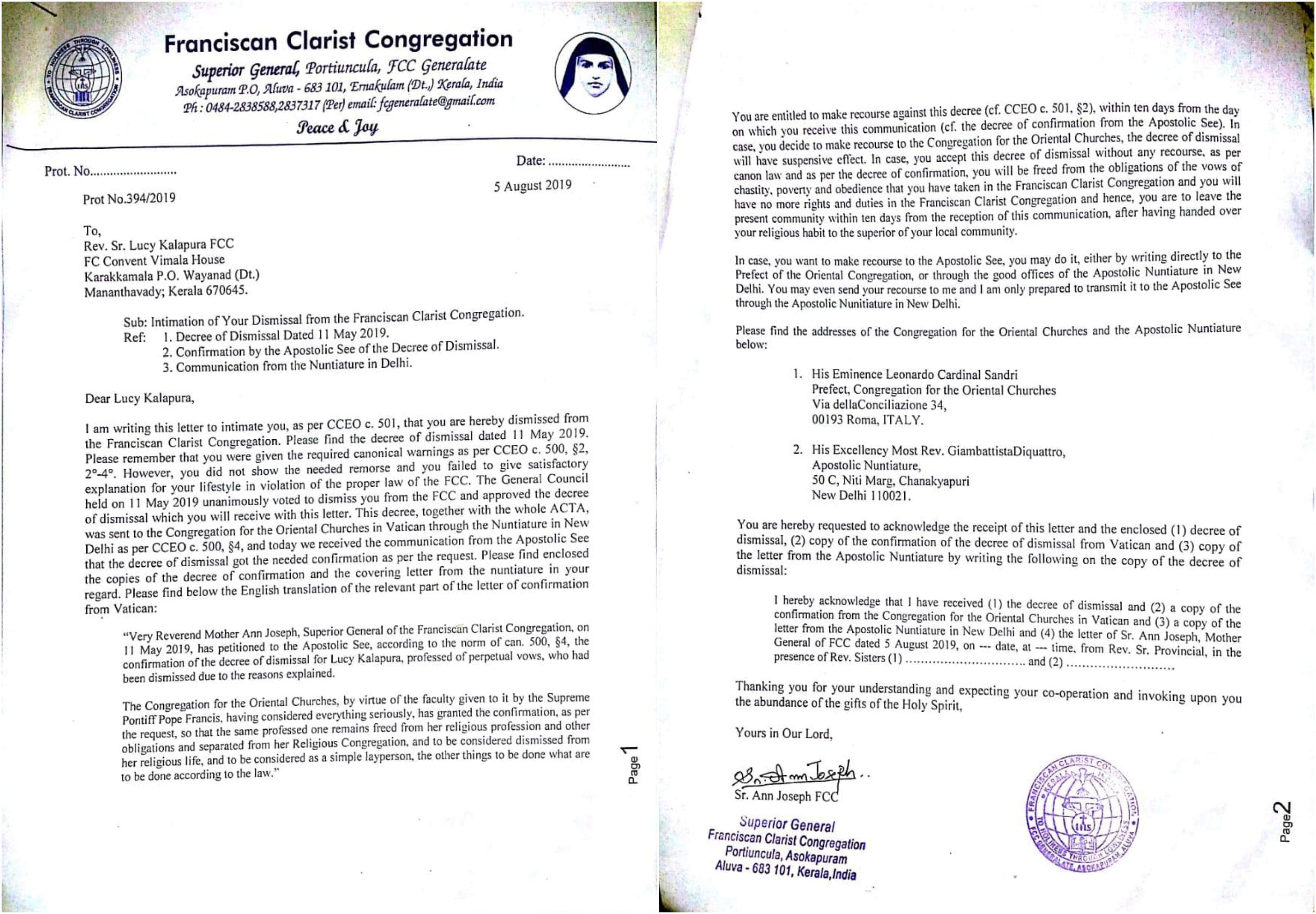 However, Sr Lucy, who stays at Karakkamala convent of Mananthavady Diocese in Wayanad, is given an option to recourse against the decree within 10 days from Wednesday. "In case you want to make recourse to the Apostolic See, you may do it either by writing directly to the Prefect of the Oriental Congregation or through the good offices of the Apostolic Nunciature in New Delhi," said Sr Ann.

If Sr Lucy accepts the letter she is entitled to leave the congregation within 10 days. "In case, you accept this decree of dismissal without any recourse, as per the canon law and as per the decree of confirmation, you are to leave the community within 10 days from the reception of this communication, after having handed over your religious habit to the superior of your local community," said Sr Ann.

Meanwhile, Sr Lucy said that she will fight the battle legally and will be sending a letter to the Vatican showing her innocence. "They cannot make me move out of my home. I have not done anything wrong, I will make an appeal to the Vatican and will move legally against FCC," said Sr Lucy.

Earlier Sr Lucy was sent sent several warning letters and was accused of disobedience and breaking the vow of poverty for a list of other ‘wrongdoings,’ including publishing her book ‘Snehamazhayil’, taking part in TV channel discussions, registering the car in her own name, taking loan without seeking permission and publishing her articles in non-Christian weeklies and dailies. She was also accused of learning driving and getting a license without the permission of Superior General.

In September last year, Sr Lucy was banned from church activities and was relieved from her duties for taking part in the protest of the nuns demanding the arrest of Bishop Franco in the nun rape case.

Stay up to date on all the latest Kerala news with The New Indian Express App. Download now
(Get the news that matters from New Indian Express on WhatsApp. Click this link and hit 'Click to Subscribe'. Follow the instructions after that.)
TAGS
kerala nun rape case Sister Lucy Franciscan Clarist Congregation Bishop Franco Mulakkal Vatican