The northern districts of Wayanad, Malappuram and Kozhikode, which bore the brunt of the rain fury this season, have reported the most deaths so far.

KOCHI: The death toll in the continuing rains and landslides in Kerala has touched 57 even as the number of people who have been shifted to relief camps neared the 1.65 lakh mark early on Saturday.

The northern districts of Wayanad, Malappuram and Kozhikode, which bore the brunt of the rain fury this season, have reported the most deaths so far. Scores of people are still missing in the big landslides two days back, which is likely to take the death toll much higher, it is feared.

Kalpetta MLA CK Saseendran has said that nine people are dead and another nine are missing from Puthumala after a major landslide rocked the region on Thursday evening.

"A meeting involving locals, elected representatives and village-level officers was held to take stock of the situation. Nine bodies have been recovered," Saseendran told the media. The MLA and his team had visited Ranimala on Saturday to know about the plight of the stranded people there.

He said migrant labourers working at the tea estate were safe. "Around 10,000 people are on the other side in Chooralmala, Mundakai, Neelikkapp. Most of them have been shifted to safety in Meppady and the operation is going on in full swing," he said.

Deaths due to #keralarains2019 touch 57. Highest number of deaths recorded in Mallapuram (19) followed by Kozhikode (14) and #Wayanad (10).@RahulGandhi @vijayanpinarayi @CMOKerala

The state has witnessed over 80 landslides across eight districts in the past couple of days.

Around 200 people are stuck at Vaniyambalam near Munderi in Malappuram and efforts are on to rescue them.

Search operations are also on at Kavalapara in Malappuram where a massive landslide occurred. Three bodies have been recovered till now, the Chief Minister said. In Pathanamthitta, heavy rainfall has led to a huge rise in the water level of Pamba River. Around 15 relief camps have been opened at Thiruvalla in the district.

The Alathur area in Palakkad district which received the maximum rainfall of 398.5 mm in the state till 8 am on Friday is returning to normal. Bus services from Alathur to Pazhayanur, which had been suspended due to water overflowing onto the Athipotta bridge, resumed. 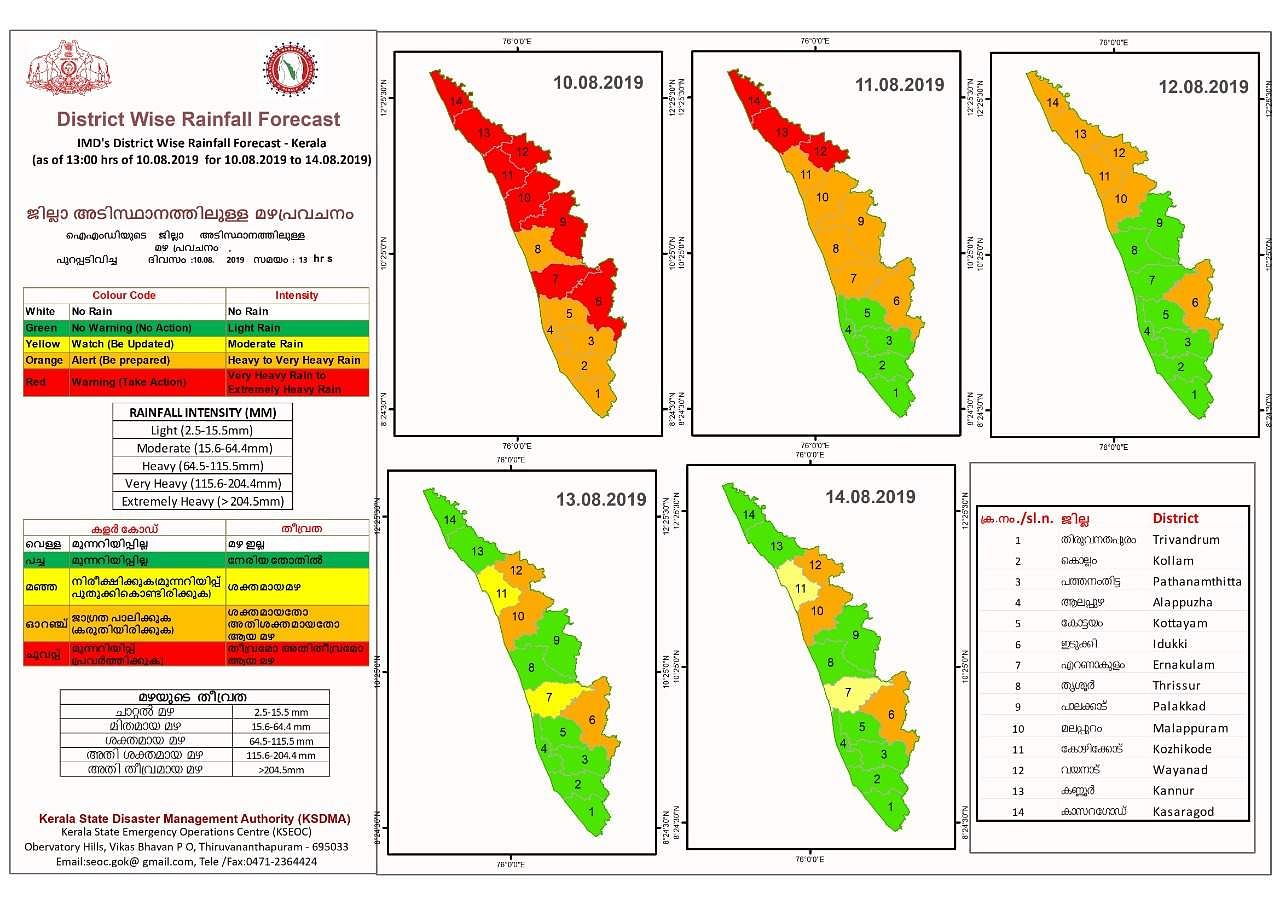 As the shutters of the Mangalam dam were opened, the Gayathri river, Thennilapuram river and Mangalam river were in spate which resulted in water overflowing above the Thonikadavu bridge. Buses to Ottapalam also resumed operations.

The Pattambi bridge continued to be submerged disrupting traffic to Guruvayur and Pallipuram.

In Shoranur, as the rains receded a bit, the water level in the Bharathapuzha did reduce by around six feet. However, as the Shanthitheeram remained submerged, relatives of the deceased found it difficult to perform the last rites. The Nambaram area near Shoranur continued to remain waterlogged.

According to the figures released by the Kerala State Disaster Management Authority, a total of 1.5 lakh people (40,000 families) have been shifted to 1,221 relief camps across the state.

One of the four shutters of the Banasura Sagar dam in Wayanad was opened up to 10 cm at 3 pm on Friday. The water flow is at the rate of 8.5 cubic metres per second. "The water is being released to the Karaman rivulet. In an hour the water-level in the rivulet is expected to rise by a maximum of 10-15 cm. All precautions have been taken. People residing on the banks of Karaman rivulet have been shifted," said P Manoharan, Assistant Executive Engineer (Research and Safety Sub-division), Banasura Sagar.

Kottathara, Padinjaarathara and Panamaram gram panchayats are likely to be affected by the water release from the dam. The authorities have already shifted more than 150 people from these areas to the relief camps.

The District Collector has asked the people in the nearby areas to be cautious as the nearby rivers will see 10-15 cm increase in water levels. This is the first big dam to be opened in the current spell of rains in Kerala though the shutters of many small irrigation dams were opened in the last two days.

The Cochin airport showed signs of improvement with water levels receding and runway getting cleared at a fast pace for opening on Sunday if rains stay away. While water level in the apron area is receding, cleaning operations also started. Six out of the eight stranded aircraft also departed. The remaining two will fly to their destinations on Sunday as per schedule, said the airport authorities.

With Ernakulam district also been put on ‘red alert’, indicating extreme heavy rains on Saturday, it remains to be seen how the airport authorities can cope with a sudden flow of waters into the runway again.

The rail traffic also continued to be disrupted on Saturday due to landslips and trees falling on the tracks in many parts of the state.

The railway authorities have announced the cancellation of six trains, partially cancelling another three and diverting one after trees fell on the track or landslips.

Meanwhile, the search operations resumed at Kavalappara in Malappuram, where an entire hill fell like a house of cards on Friday. Three bodies were recovered on Friday while several others are feared to be still under the debris, officials said.

Though rain intensity has come down in Wayanad, the Met Department has forecast heavy rain from Saturday afternoon. Over 25,000 people are housed in relief camps in the district alone.

On Friday, after a brief lull in the early morning, the heavy downpour had started in Wayanad.

A woman's dead body was also found from the landslide debris at Puthumala, Meppadi, taking the total monsoon-related death toll to 12 in the district.

The service of Navy has been roped in to evacuate stranded people of Chooralmala and Mundakai in a helicopter. The chopper is expected to reach Sulthan Bathery by 12.30 pm.

Kuttiyadi, Poringalkuthu and Banasurasagar dams have reached their maximum storage level and water will be released in a controlled manner. People living on the banks are being evacuated to safer areas.