Having been born and brought up in Wayanad’s hilly terrain, we sensed incessant rain had changed the nature of the mountain.

MEPPADI (WAYANAD): As survivors recall their narrow escape from the deadly landslide at Puthumala, Meppadi, Wayanad district, one thing is certain  -  all of them had a clear warning of an impending disaster and they managed to escape because of their decision to leave their homes hours before the tragedy struck.

Meppadi panchayat president KK Sahad told Express on August 7, the eve of the incident, there were a couple of small landslides in the area which gave a clear indication that the situation was not normal.

Kerala floods: How negligence and greed led to the Kavalappara tragedy

“We went there and had aclose look at the landslides. Having been born and brought up in Wayanad’s hilly terrain, we sensed incessant rain had changed the nature of the mountain. We immediately directed the people living there to move out of their homes. Many of the people shifted immediately while a few others took time to move out. The lucky ones, who survived, are those who moved out immediately,” he said.

M K Baba, 57, who moved out following the warning from locals, said he and his family were lucky to escape because they shifted immediately. 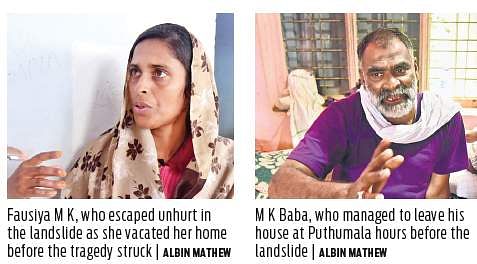 “We didn’t hesitate. There was a minor landslide near our home and I personally went and had a detailed look. I sensed something was wrong with the mountain,” Baba, born and bought up at Puthumala, said he knows the region better than most.

Though the landslide didn’t damage the house of Fausiya  M K, 34, it claimed the life of her three-year-old nephew.

“My brother’s family lived in another house in the area. We vacated our house immediately on being asked to do so. But my relatives took time to move out. They were late and couldn’t escape when the earth came down. My brother’s wife was in the kitchen when she heard a loud roar and saw the earth coming down. She tried to grab the child which was sleeping on the cot, but she was thrown out of the house by the gushing mud. She was rescued by people while the child couldn’t be saved,” Fausiya said.

Misria N T, a Class X student, who is into relief activities at the camp where her parents are lodged, said they had decided to shift elsewhere after being urged by locals in the wake of rain.

“We were at home doing various chores when they asked us to shift to Meppadi School. Luckily we moved out on time. All my family members escaped because we moved out on August 7 itself,’ she added.

More from Kerala.
Now we are on Telegram too. Follow us for updates
TAGS
Kerala floods Wayanad Flood fury