In many of the profit-making airports, non-aeronautical revenue constitutes around 50 per cent of the total revenue.

THIRUVANANTHAPURAM: As the Kannur International Airport Ltd (KIAL) is set to hold its first anniversary celebrations of the airport on Monday, it finds itself heading into headwinds over a host of issues.

Against the terminals designed with a capacity to accommodate nine million passengers a year, the airport is handling an average of 4,000 passengers per day, taking the total passenger volume in the opening year to less than 15 lakh (1.5 million). According to the data available with the civil aviation ministry, the daily average number of passengers in Kannur Airport is close to 4,000 from January 1, 2019, till November 15, 2019. The highest daily average of 5,131 was recorded in August.

According to sources, the airport’s monthly revenue hovers around Rs 4 crore and it requires around Rs 13 crore to meet its operational expenses every month, which include the salary for employees as well as Central Industrial Security Force personnel as well. The fact that only four airlines - Air India, Air India Express, Indigo and Go Air - are utilising the airport further worsens the situation.

The state’s request to the centre to grant ‘point of call’ status for the airport, which will allow foreign airlines to operate to and from the airport, was rejected on the ground that the status is considered on the principles of reciprocity in terms of commercial opportunity for the airlines of each side.

The centre pointed out that currently, three international airports -  Trivandrum, Calicut and Cochin – had points of call status under a host of bilateral Air Services Agreements, including those with most SAARC, ASEAN and Gulf countries. However, reciprocity for the Indian carriers was very limited and an imbalance exists favouring foreign carriers. Therefore, interior areas in the country are not being offered as points of call to foreign carriers.

In many of the profit-making airports, non-aeronautical revenue constitutes around 50 per cent of the total revenue. Kannur airport is yet to tap the non-aeronautical revenue sources, although it has appointed consultancy firm KPMG to draw up a plan to help the airport break even in three to five years. As per KPMG suggestions, a duty-paid shop is to be opened in the airport by this month-end and cargo operations are to begin next month.

V Thulasidas, KIAL managing director, told TNSE  that it was not possible for a newly commissioned airport to break-even in the opening year itself. “We have set a target of three to five years and the airport is working on a plan to break-even in the third year for which we have appointed KPMG. Allowing foreign airlines to operate from the airport is necessary to meet the revenue and traffic projections of the airport for which we will continue to exert pressure on the centre. Further, tapping non-aeronautical revenue sources is our next immediate priority for which we have also drawn up a detailed plan with KPMG’s help,” he said. 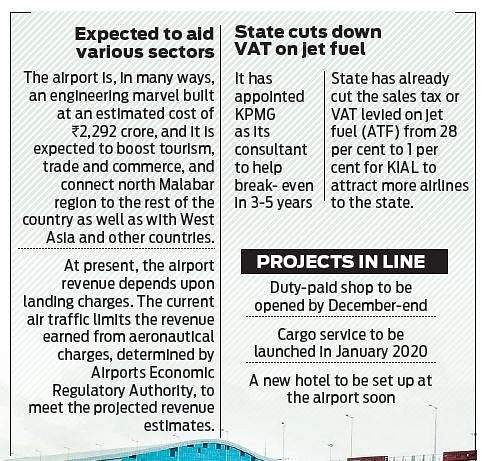 More from Kerala.
Now we are on Telegram too. Follow us for updates
TAGS
Kannur International Airport Ltd Kerala