The resilience of the state’s citizens is tremendous.

Yasmin Ali Haque, Unicef India head, gives an overview of the global agency’s operations in the state during an exclusive chat with Express special correspondent Arun Lakshman in Thiruvananthapuram on Saturday. The Unicef plans, include setting up a regional office of the UN in Kerala, besides aiding the state’s recovery from the devastation wrought by mid-August floods.

Q. What are the major activities UN is planning in the state?
A. We will soon open an office in the capital city for better coordination with UN agencies active in the state and to provide requisite support and other facilities to the state government in its rebuilding operatio   ns post the floods. The informal functioning of the office will begin by March 15. Already, 52 members of our team are working with the government across the state following the deluge. 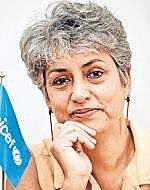 Q. Between your latest visit to the state and the one in September just days after the floods, what changes have you noticed?
A. The resilience of the state’s citizens is tremendous. I saw how people in flood-hit areas bounced back. The love and bonhomie seen in government relief camps was something unseen. There were no caste, creed or religious considerations there. It was remarkable.

Q. You were in Pathanamthitta the other day for a study on the post-flood situation. Your take?
A. In Pathanamthitta, I met Kudumbashree workers who built a house destroyed in the floods. The Kudumbashree women, who were recently trained in masonry, finished the house in 52 days.
Around three-four houses are in the pipeline. Some Kudumbashree units here were into making Nutrimix products and suffered losses in the floods. However, the women composed themselves and rebuilt their business.

However, they took money from sources other than normal lending agencies at a much higher interest. We are trying to support such people and are in talks on how to go about it. We also found the products and units were uninsured which worsened the impact.

Q. In Kerala, are there any support programmes you are into?
A. We are providing technical and small financial support to two child care projects, ‘Hridyam’ and ‘Salabham’.
‘Hridyam’ focuses on congenital heart diseases in infants, while in Salabham, a comprehensive study on neonatal children and identifying the diseases prevalent among them are being taken up.
Q. How does the UN plan to help the state in its rebuild and rehabilitation process?
A. The state and its people have remarkable resilience and did many things on their own. We can add value to their efforts by briefing the community.

We can also act as buffer in health, social structure, education and recovery and are putting in measures for it.
We are into awareness in Disaster Risk Reduction (DRR) and are in talks with parents and authorities. There will be a revamp of the school curriculum to include DRR and life skills. We expect to introduce the new curriculum in Classes I to XII in 2020.

Q. What are your other areas of focus?
A. Socio-psychological problem in children and their vulnerability to abuses, both physical and mental, are where we plan to make an effective intervention.
There have been instances of children being sidelined and marginalised even in their residences which  takes a toll on their mental well-being. This may happen without the parents’ knowledge. We create awareness on such matters and provide the child a friendly atmosphere through our technical support.

Stay up to date on all the latest Kerala news with The New Indian Express App. Download now
(Get the news that matters from New Indian Express on WhatsApp. Click this link and hit 'Click to Subscribe'. Follow the instructions after that.)
TAGS
Yasmin Ali Haque