CPM-Cong tie-up in Bengal not finalised yet’

Yechury said the party does not want to draw up a common minimum programme among prospective allies ahead of the LS polls.

THIRUVANANTHAPURAM: The  CPM is yet to take a final call on forging a pre-poll alliance with the Congress in West Bengal for the coming Lok Sabha elections, according to CPM chief Sitaram Yechury. A final decision in this regard will be taken on the basis of deliberations to be held by party’s Bengal state committee and the central committee on February 28 and March 3-4, respectively. 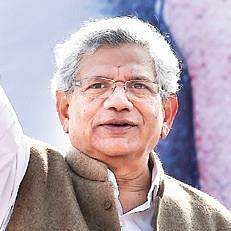 Yechury said the party does not want to draw up a common minimum programme among prospective allies ahead of the LS polls. The decision on whether to join the Opposition alliance will be taken only after knowing their agenda which will be revealed after their meeting in New Delhi on Tuesday. “Cooperation will be considered if they address issues faced by the country and the people,” he said.

‘VS to campaign’ T’Puram: Former Chief Minister V S Achuthanandan will campaign for the Left in the ensuing Lok Sabha polls, party politburo member Sitaram Yechuri has said. Yechuri was speaking to media persons after visiting the veteran leader at his residence on Monday. When reporters asked him whether VS would campaign for the Left, VS said: “Can you stop him? In the interest of the party and the people he will be there for campaigning,” he said amidst laughter.