A source close to George told Express that he has reduced his stake in CIAL from 16 per cent to 9.45 per cent last year.

KOCHI: Small and even some big individual shareholders of Cochin International Airport Ltd (CIAL) have demanded the airport to launch its initial public offerings (IPO), and are set to raise the issue during its annual general meeting (AGM) on September 29. 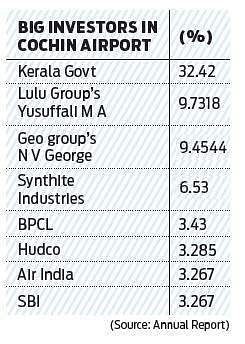 Investors argue that the CIAL has been promising the IPO to unlock the share value after it first raised funds from individuals for the airport project in the 1994-99 period. Some of the big individual investors such as N V George (aka George V Nereparambil), founder of Geo Group of Companies, frustrated with holding on to the shares for over two decades, have sold a large chunk of his shares in private transactions.

A source close to George told Express that he has reduced his stake in CIAL from 16 per cent to 9.45 per cent last year. “In the private market, Cochin Airport’s share is being transacted at `120-150/share. If CIAL is listed on the stock market after the IPO, the shares would easily command `250-500/share,” said the source.

The Kerala government, which holds nearly 32.42 per cent in CIAL, is the largest shareholder, while NRI billionaire Yusuffali M A has been acquiring stake quietly in recent years to become the second-biggest shareholder at 9.7318 per cent. Kochi-based Synthite Industries owns 6.53 per cent while central PSUs BPCL (3.43 per cent), Housing and Urban Development Corporation (3.285 per cent), Air India (3.267 per cent) and State Bank of India (3.267 per cent) are the other big investors.

There are other 18,000 small investors in CIAL, whose combined ownership is less than 10 per cent. CIAL, which pioneered the concept of Public-Private Partnership (PPP) model in airport infrastructure development, reported a net profit of `166.92 crore on a turnover of `650.34 crore during 2018-19. It has also been giving healthy dividend over 25 per cent over the past many years.

“With the government looking to create more capacity in this sector, private airports will require funds to expand, tech enhancement, etc to serve increasing air traffic. CIAL has been a pioneer in this area and should be the one to go to the market too,” said Raj Narayanan, a small investor in CIAL with roots in Kerala. “IPO will be the best way of unlocking value for the sector and the shareholders too,” he said. CIAL spokesman, when contacted, said Kerala government contributed `100 crore out of the total of about `298 crore, owning over a third of the airport’s shareholding. “Some shareholders always raise the demand for IPO during AGMs but it’s up to the government to make a decision. It will depend on whether the state government will want to reduce its ownership or not,” he said.

More from Kerala.
Now we are on Telegram too. Follow us for updates
TAGS
initial public offerings Cochin International Airport CIAL