Ashfaq Masjeed, one of the group members who routinely updates his relatives back home, did not confirm or deny Abdulla’s death. This has led to speculation whether this is a ploy

KASARAGOD: Abdul Rasheed Abdulla, 32, the alleged ring leader of the first group of Malayalees that joined the Islamic State in 2016, is reportedly killed in a US airstrike in Afghanistan. According to a news report, Abdulla, an engineering graduate, was killed a month ago at Khorasan province. His family and members of the group who are with him in Afghanistan, however, did not confirm the death.

Twenty-one people, including children, led by Abdulla left their homes in Padna, Trikaripur and Palakkad in May 2016 to join the IS. They flew to the UAE, from where they entered Iran and crossed over to Afghanistan to be in Khorasan, a province controlled by the IS, according to the police sources. Ashfaq Masjeed, one of the group members who routinely updates his relatives back home, did not confirm nor deny Abdulla’s death.

“Even when Ashfaq’s cousin Shihaz and wife were killed, he confirmed it. But now he is silent,” said BC Rahman, a social activist in Padna who is in touch with the group on Telegram messaging app. But the news report quoting a message from an unnamed IS operative said, “Total three Indian brothers, two Indian women and four kids were killed”.

Rasheed had gone with his wife Ayesha (earlier known as Sonia Sebastian), and their two-and-a-half-year-old daughter Sara. She must be five years now. Circumstantial evidence says Rasheed Abdulla could have been killed or seriously injured, said Rahman. Abdulla was responsible for convincing and recruiting people to the IS. He used to run several WhatsApp and Telegram groups and frequently send voice and text messages urging people to join the IS. A few months ago, he sent a vitriolic voice message urging Muslims to launch ‘lone wolf’ attacks in Kerala and India, if they were not able to make it to the IS land. The message shattered his carefully cultivated image of being a puritan and peace-lover. But for the past two months, there was no message from Abdulla, said Rahman. “It is very unlikely of him. Last time, when there was a rumour of he being killed in action, Rasheed immediately sent out a voice clip to debunk it,” said Rahman.

In 2016, when he left Padna, Rasheed had left a message in his brother’s phone: “Tell my parents we have left home to make hijrah (the migration to the land of Islam),” he said. Abdulla’s parents are in Oman, where they run a furniture shop. His one brother is a dentist and another has autism and is dependent on his mother.

Rasheed, a native of Udumbunthala, a tiny village near Padna, grew up in Oman. After completing schooling at Indian School Darsait, Muscat, he joined an engineering college in Pala, Kottayam, to study electronics and communications. During intercollegiate events, he met his future wife Sonia Sebastian, who was in an engineering college in Ernakulam. After their BTech, Rashid joined Al Rostamani Communications in Dubai as pre-sales engineer and IT consultant; and Sebastian joined an MBA course in a college in Bengaluru. The two were in touch over the internet. During the time, Sebastian, who did her schooling in Bahrain, took a serious interest in Islam.

By the time she completed MBA, she was a practising Muslim. As a new convert, she used to speak at events organised by Niche of Truth of Salafist televangelist M M Akbar. Later she joined Akbar’s Peace International School in Trikaripur.

Rasheed too quit his company and joined the school. From a teacher, he soon became a trainer of teachers in all Peace Schools and was even helping set the curriculum. His family said he grew closer to the IS ideology when he was Peace School.

In March 2018, an aerial strike killed four members of the closely knitted group of 21 members. 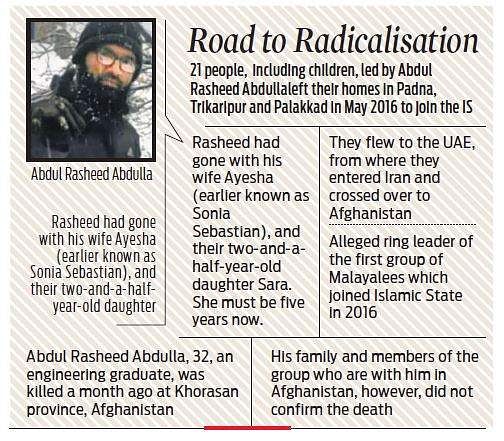 Now we are on Telegram too. Follow us for updates
TAGS
Abdul Rasheed Abdulla ISIS terrorist Afghanistan