As the cradle of the communist movement in the state, Alappuzha had a pride of place in state politics since the pre-Independence period.

ALAPPUZHA:  Alappuzha Lok Sabha constituency, spread across six Assembly segments of Alappuzha district and one in Kollam district, mostly comprises a cross-section of the fisherfolk of the state.
It is more than a 100-km-long constituency that borders the Arabian sea in the west, where most of the fishing communities live. From Aroor in Alappuzha to Chavara in Kollam, the electorate dominated by  marginalised sections from the fishing community will decide the fate of the candidates in the crucial Lok Sabha constituency.

As the cradle of the communist movement in the state, Alappuzha had a pride of place in state politics since the pre-Independence period. The constituency is known for the Punnapra-Vayalar uprising and is home to many communist stalwarts. Despite its strong presence, the constituency has not been a happy hunting ground for the Left movement in LS polls. In the past 13 general elections, only four times have the LDF won from the constituency.

In the first election in 1962 -- the name of the constituency was Ambalapuzha -- veteran Communist leader P K Vasudevan Nair got elected from the segment. In the next election in 1977,  young Congress leader V M Sudheeran wrested the seat. But in 1980, Suseela Gopalan of the CPM emerged the winner.

In the next two elections in 1984 and 1989, Vakkom Purushothaman of the Congress became victorious. In the 1991 election, Vakkom was defeated by young CPM firebrand T J Anjalose. However, the Congress recaptured the constituency through Sudheeran who posted a hat-trick victory - in 1996, 1998 and 1999 - before losing  to Dr K S Manoj of the CPM in the 2004 election. The Congress wrested the seat again in the next two elections through K C Venugopal. In the Assembly segments, six out of seven are in the LDF kitty. The UDF has representation only in Haripad, where Ramesh Chennithala had won.

Anjalose overpowers stalwart Vakkom
T J Anjalose, a firebrand leader of the CPM, defeated Congress stalwart Vakkom Purushothaman in the 1991 election. CPM fielded Anjalose, who was the then chairman of the Kerala University union. When the campaign reached its final stage, Rajiv Gandhi was assassinated and the Congress swept the polls, winning 17 seats in the state. But Anjalose won from Alappuzha with a margin of 14,075 votes and became the star of the time and the CPM. He was later expelled from the party and joined the CPI and became the district secretary of the CPI. 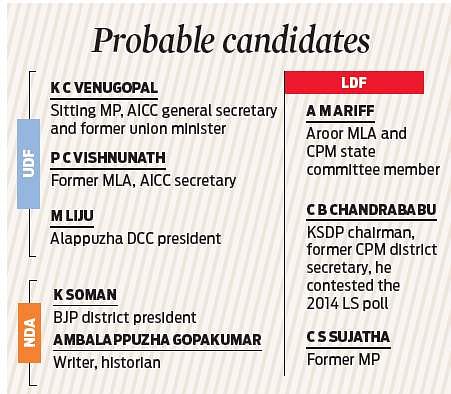 Mid-August floods, Ockhi and poll plank
The economic development of the constituency, which has not been able to attract big investments for the past several years even as its coir sector is facing a crisis, will be a talking point during the elections.

The plight of the people of Alappuzha, who bore the brunt of last year’s flood, and earlier the Ockhi cyclone, will also be a campaign issue at the polls. The UDF is likely to bring up the government’s ‘failure’ to pay compensation to the affected as a poll issue.

Stay up to date on all the latest Kerala news with The New Indian Express App. Download now
TAGS
Alappuzha Lok Sabha constituency