Nithyaharitham: A tome on gentleman-actor Prem Nazir who was a colossus

KOCHI: He was indeed Mollywood’s first superstar, long before the term entered Malayalees’ collective consciousness. Now, over 30 years on since Prem Nazir disappeared from the silver screen for one last time, the persona behind the gentleman-actor, who scripted a record by playing the lead in  700-plus movies, will be showcased in a 976-page tome put together by lensman R Gopalakrishnan.

‘Nithyaharitham’, brought out by Prem Nazir Foundation, which  has more than 2,000 rare photographs of the evergreen thespian, will be jointly released by actors Mammootty and Mohanlal at a function here on Sunday. 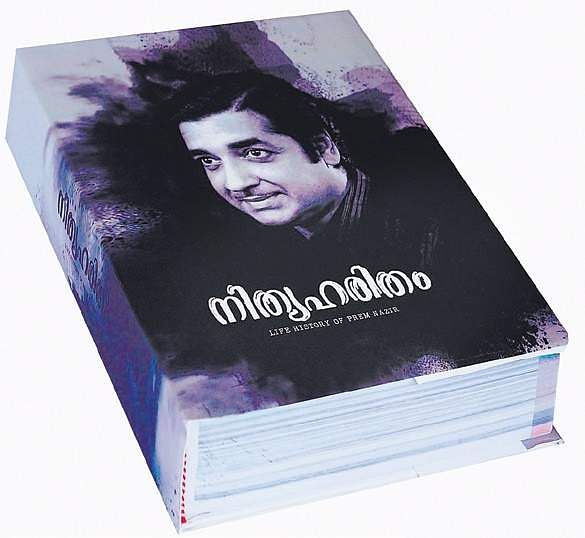 “The book contains 11 chapters which are named after some of the popular movies of Prem Nazir.  For instance, the first chapter is titled ‘Ezhuthatha Katha’. The highlight of the section will be a write-up on three generations of Prem Nazir’s family,  with accompanying photographs. It sheds light on the family’s history and Nazir’s ancestors,” Gopalakrishnan told Express.

The early years of Nazeer’s career, including his debut movie ‘Thyaga Seema’ which never saw the light of the day; filmography of his films, their cast and crew; his 23 Tamil movies; and interviews with 180 people who had worked with the evergreen hero are featured chapter-wise in ‘Jeevitha Yatra’, ‘Padayottam’  ‘Chitramela’ and ‘Manushya Bandhangal’.

“I had been working as a still photographer since the late 1970s and used to  contribute regularly to some of the popular Malayalam magazines. On Nazir’s 25th death anniversary in 2014 , an exhibition was organised by Prem Nazir Foundation for which I contributed stills of Nazir. It was Suresh Kumar,  the foundation’s chairman, who propounded the idea. My efforts received full backing from  Nazeer sir’s kin  and the foundation,” said Gopalakrishnan.

‘Nithyaharitham’ also has a chapter - ‘Nazhika Kallukal’- which depicts copies of original posters of Nazeer’s films. All the articles written by Nazir are featured in the chapter, Manassakshi.
The book is priced at a  rather stiff `2,000.

“It took us more than 22 months to complete it.”

“The publishers are also planning an English version of the tome and the translation work is under way,” said Gopalakrishnan.

Stay up to date on all the latest Kerala news with The New Indian Express App. Download now
TAGS
Prem Nazir