Though there has been little headway, police are unwilling to take the version of the company employees at its face value owing to inconsistencies in their statements

KOCHI: The needle of suspicion in the gold heist which rocked Kochi on Friday points towards the role of an insider who may have informed the robbers about the arrival of 20 kg gold to the gold refining company at Edayar near Eloor on Thursday night.

Though the cops are yet to get any clue in the case, in which the four employees escaped unhurt even after the two men on a motorbike attacked the SUV after using a pepper spray on them, officers have also started probing the role of company insiders as there are several missing links in the company officials’ version.

“So far, we have not received any clue when we interrogated the four employees since last night. But we can’t completely trust them as help from an insider is essential to do such a daring robbery. Though we don’t have any clue about the functioning of such a gold refining unit in our station limit, the duo had clear knowledge about the business in the firm. How could the robbers come to know about it? Moreover, how can the duo occupy a position near the premises when the vehicle reached in front of the company? So, there is every possibility of help from inside,” said a police officer who is part of the investigation team.

According to the police, CGR Metal Alloys has been functioning for the past two decades, but no information was available with the police on its presence or its business. Even the company hadn’t placed a board in front of its building.

“Normally, when a vehicle is attacked by someone it will get damaged to some extent. But in this case, only the window panes and the rear windows of the SUV were damaged. Even no scratch can be seen on the body of the vehicle. This also raises suspicion,” said the police.

The police also doubt the employees’ statement of using the pepper spray by the bikers. “Though the employees informed the two bikers used pepper sprays before starting the robbery, we couldn’t trace the impact on them. Normally the nose, throat and lungs are immediately affected when someone uses a pepper spray. This is also a reason for suspicion. It is so early to reach a conclusion,” the officer said.

Jewellers who buy old gold jewellery from customers melt these ornaments into nuggets or bars
These are then sent to gold purifying companies such as CGR Metal Alloys, which incidentally is owned by a prominent jeweller.

When we sent old jewellery, we take a sample of the melted bar with us. We instruct the refining company on the quality of the gold we require such as 916 purity or 22-carat,” said B Girirajan of Bhima Jewellers. “When we get purified gold, we check its purity. We also compare it with the sample we have kept,” he said.

In the range of D2-3 per gram
Insurance companies offer a policy for such gold against loss in transit from refining firms. It’s called ‘block policy’, said Girirajan, All Kerala Gold and Silver Merchants’ Association, president. 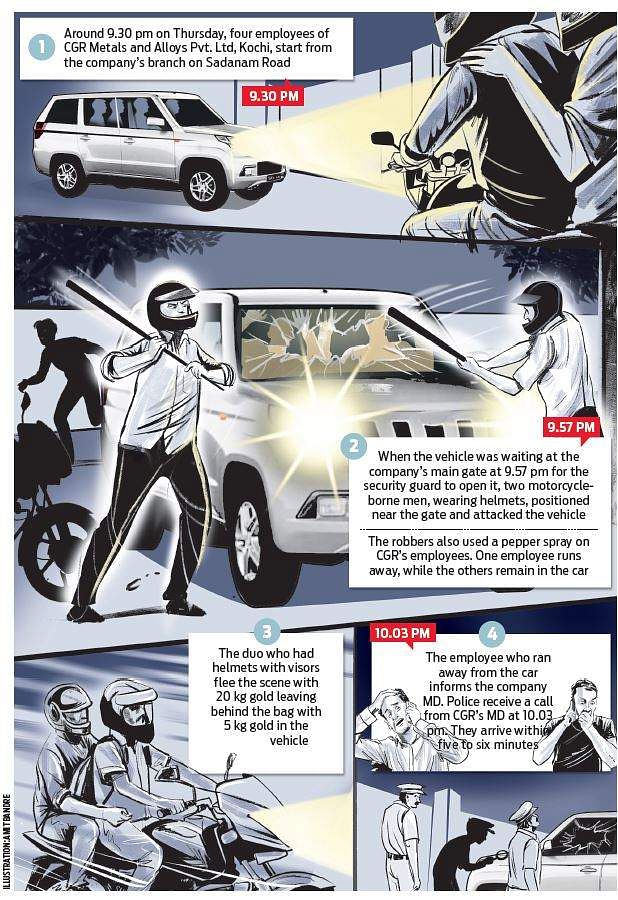 Stay up to date on all the latest Kerala news with The New Indian Express App. Download now
TAGS
gold heist Kerala theft