Students may miss out on wearing handloom uniforms on Day One

THIRUVANANTHAPURAM: The state government missed the deadline for distributing handloom fabric to schools for uniforms on Wednesday due to the treasury curbs imposed during the fag end of last fiscal.

Though the fabric would reach the schools by May 31, a majority of the students may not get to wear the handloom uniforms for Praveshanolsavam as it would take some time to distribute the fabric among students.

The Directorate of Handlooms has begun steps to supply a record 38 lakh metres of cloth to students under the free handloom uniform scheme for the next academic year. But the state could achieve around 60 per cent of the target when the deadline ended on Wednesday.

A senior officer said weavers produced the required quantity of fabric in the last fiscal. However, its dyeing was carried out in Tamil Nadu and the financial austerity measures taken by the state in the light of fund crunch delayed payment to dyeing units, affecting the project’s progress.

K Sudhir, Director of Handlooms and Textiles, said all the issues have been sorted out and the fabric would reach schools before May 31.

The scheme has brought a lease of life to the ailing handloom sector. The dismal health of the state’s public sector textile industry forced the weavers to lead a hand-to-mouth existence. The scheme generated more employment and popularised handloom fabric among students.

On the economic front, the textiles segment continues to be a liability for the state with all 11 PSUs in the sector registering loss, taking cumulative losses to Rs 94.17 crore in the last fiscal against Rs 76.76 crore in 2017-18 FY.

“It is very difficult to strike a balance between reviving the ailing traditional sector and making strides in financial prudence. It is not possible to distribute quality handloom fabric at a cost proportionate to investment made in the sector. The scheme aims at reviving the handloom sector and providing employment to weavers who have been staring at a bleak future. The momentum received in the sector is also visible from the fact around 19,000 weavers are now active in the state,” said officials. 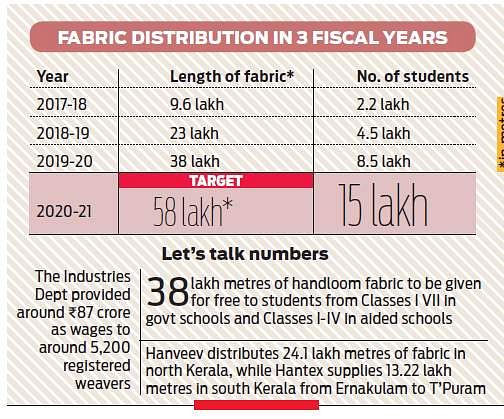 Stay up to date on all the latest Kerala news with The New Indian Express App. Download now
TAGS
Kerala Directorate of Handlooms