The Higher Secondary admission scenario in the state has baffled many. The number of seats up for grabs is lesser than the number of students passing the SSLC examination.

KOZHIKODE: The higher secondary admission scenario in the state has baffled many. The number of seats up for grabs is lesser than the number of students passing the SSLC examination.

But surprisingly, seats remain vacant in many districts primarily due to a mismatch between demand and supply. While in urban areas, there is an increased demand for Plus-I seats, schools in rural areas and remote panchayats witness vacant seats. So where do the remaining students go, one may wonder. For such students, Open School is the option. Last year, around 80,000 students, mostly from districts in north Kerala, joined Open Schools. 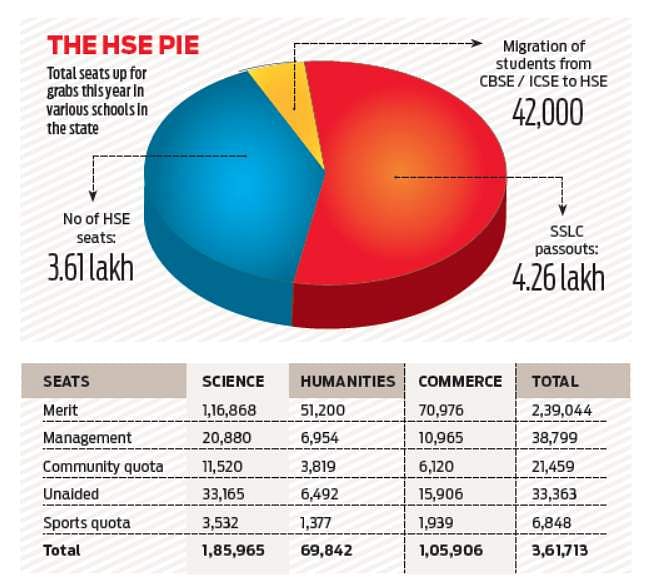 “In Malappuram district alone, nearly 75,000 students cleared SSLC exam last year. But the Higher Secondary seats were just over 50,000 in the district forcing a large number of students to take admission in Open Schools. What is urgently required is allotment of additional Plus-I batches based on the actual requirement,” said Shoukathali O, general secretary of Kerala Higher Secondary Teachers’ Union.
This year, 4.26 lakh students passed the SSLC examination. Add to it, around 42,000 students who would make a switchover from national boards to the state syllabus.

With a batch strength of 50 at present, a total of 3.61 lakh seats are up for grabs this year for HSE and another 30,000-plus seat for VHSE.

Of the 3.61 lakh seats in Plus-I course this year, 1.41 lakh is in the government sector while the aided and unaided sectors comprise 1.65 lakh and 55,563 seats respectively. Keeping in tune with the preference of students, science stream tops the chart with 1.85 lakh seats followed by commerce with 1.05 lakh seats.

The number of seats in the humanities stream is around 70,000. Every year, a marginal increase in seats is made in the Higher Secondary sector. Last year the increase was 30 per cent. This year, it could not be affected since the election model code of conduct is in place. This means, when the first two allotments happen before June 3, applicants will be vying for 50 seats in a batch as against 60 in the previous years.

“Due to the lesser number of seats, many applicants may not be able to get the subject combination or school of their choice. This would prompt even meritorious students to opt for management quota against a donation of up to Rs 40,000 a seat,” cautioned a Higher Secondary teacher of an aided school. The uncertainty among parents would enable aided school managements to make a killing this year in the form of donations, he added.

Meanwhile, Higher Secondary Directorate officials have assured students and parents that there is no need to panic. “The government will take an appropriate decision (on increasing Plus-I seats) after the election model code of conduct is lifted. There is no cause for concern,” said Prakashan P P, Joint Director (Academic), Higher Secondary Directorate.

Stay up to date on all the latest Kerala news with The New Indian Express App. Download now
TAGS
SSLC Kerala SSLC results