Wayanad garnered national attention after Rahul chose it as his second parliamentary constituency besides Amethi in Uttar Pradesh.

KALPETTA: Though he lost in his family bastion, Congress president Rahul Gandhi won the Wayanad seat by a thumping margin of 4,31,542 votes against his nearest rival, CPI’s P P Suneer, registering the highest victory margin in the history of Lok Sabha elections in the state.
Wayanad garnered national attention after Rahul chose it as his second parliamentary constituency besides 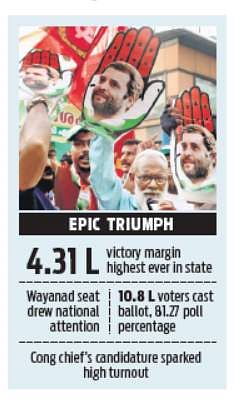 Amethi in Uttar Pradesh. The people enthusiastically received Rahul’s candidature. Considered the ‘safest’ seat for the Congress due to the strong minority vote presence, the only question was about the winning margin.

The constituency had witnessed an eight per cent increase in voter turnout from the previous elections in 2014 which gave indication of an increased victory margin for Rahul. Over 10.8 lakh voters took part in the election recording 81.27 poll percentage. The constituency had the maximum number of 20 candidates in the state.

Right from the initial hours of counting of votes, Rahul maintained a massive lead over Suneer, who finished second. Rahul’s popularity among the masses and huge support from  IUML pockets and  tribal belts, have to be credited for  the massive win. Though significant gains were expected from assembly segments in Malappuram district, Rahul secured a huge share of votes from the three  segments in Wayanad district. Tribals constitute a large voting population in Mananthavady, Sulthan Bathery and Kalpetta segments.

Stay up to date on all the latest Kerala news with The New Indian Express App. Download now
(Get the news that matters from New Indian Express on WhatsApp. Click this link and hit 'Click to Subscribe'. Follow the instructions after that.)
TAGS
Rahul Gandhi 2019 Lok Sabha polls P P Suneer