The popularity of Hibi Eden as an MLA helped him overcome the challenges posed by CPM leader P Rajeev in Ernakulam.

KOCHI: Perhaps it is for the first time three Young Turks go to Lok Sabha from the state. 32-year-old Ramya Haridas, who wrested Alathur seat from two-time MP P K Biju, is the youngest parliamentarian from the state. Youth Congress state president Dean Kuriakose (Idukki), 38, and 36-year old Hibi Eden (Ernakulam) are the other two young candidates who emerged winners.

In the previous Lok Sabha, the state did not have a single MP aged between 25 and 40 years. 65 percentage of the members from here were above 55. Ramya emerged victorious and scripted history by wresting the LDF bastion of Alathur by a margin of 1,58,968 votes. The popularity of Hibi Eden as an MLA helped him overcome the challenges posed by CPM leader P Rajeev in Ernakulam.

He set another record of garnering the highest margin of victory of 1,69,153 by overcoming the record of his father late George Eden, who secured 1,11,305 votes in 1999. Dean had contested in the previous elections too but lost to LDF Independent Joice George.30-year old V P Sanu, SFI president, was the youngest LDF candidate. However, he lost to senior IUML leader P K Kunhalikutty in Malappuram. 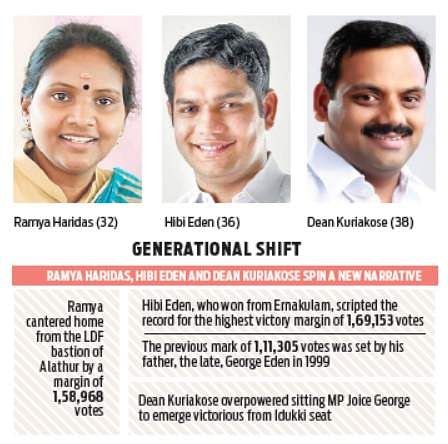