Directorate General Edu to be set up this academic year

THIRUVANANTHAPURAM: Amidst stiff opposition from teachers’ organisations, the state government has decided to go ahead with the unification of High School, Higher Secondary and Vocational Higher Secondary wings in the state.

The Cabinet on Wednesday decided to implement the recommendations by the Khader Commission, formed to improve the quality of school education up to Plus 2. The recommendations will be implemented in a phased manner. An IAS officer will be in charge of the new directorate to be set up during 2019-20. 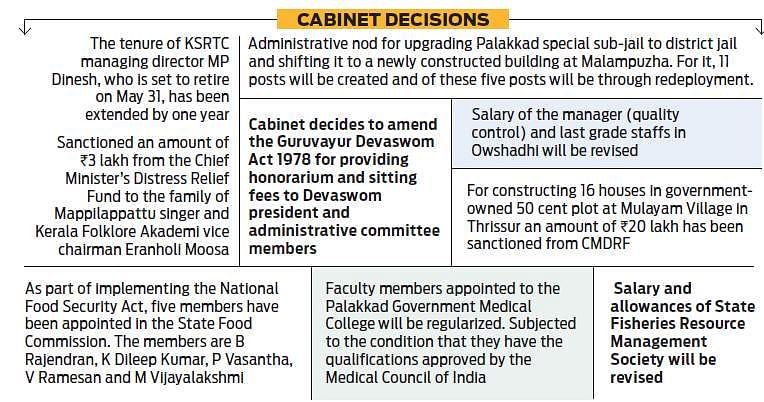 The Director of General Education will be appointed as Exam Commissioner for the running of public examinations including SSLC, Plus 1 and Plus 2 - which are currently being run by the DPI, DHSE and DVHSE. However, the different categories like the Lower Primary, Upper Primary, High School, Higher Secondary and Vocational Higher Secondary sections will continue as such.

All these sections will be under the Director of General Education. The existing office administrative structure of RDD, AD, DDE, DEO and AEO at different levels will continue. The Principal will be the head of the institution up to the Higher Secondary level. The existing headmaster will become vice-principal.

The principal will be in charge of the school’s total administration in addition to the Higher Secondary’s academic affairs. The vice-principal will be in charge of the academic affairs till High School. The existing High School office structure will be converted into a common office. However, till the unified structure is in force, salary distribution will continue as per the existing system.

Stay up to date on all the latest Kerala news with The New Indian Express App. Download now
TAGS
Directorate of Higher Secondary Education Kerala