Kummanam Rajasekharan, ex-state BJP chief who was NDA candidate in T’Puram, too is being considered

THIRUVANANTHAPURAM: With the Narendra Modi-led NDA Government set to be sworn in for a second consecutive term on Thursday, the state is eagerly awaiting a berth in the new Union Cabinet.
Former Chief Secretary and BJP fellow traveller C V Anandabose, who’s the brain behind low-cost housing projects and fishermen vision document, is one of the front-runners for a  berth in the Modi Government.

Two others - BJP national executive member and party’s former state chief V Muraleedharan and former Union Minister Alphons Kannanthanam - are being considered. Muraleedharan a former RSS pracharak, had functioned as ABVP former national general secretary. Several senior RSS leaders at the national level are his contemporaries in the organisation and this leverage will do good for the senior leader. Another name in the reckoning is Alphons Kannanthanam who was Minister of Tourism (independent charge), in the first Modi Cabinet. Kannanthanam is also a former bureaucrat like Anandabose and the party prefers him considering his rapport with the Catholic Church. 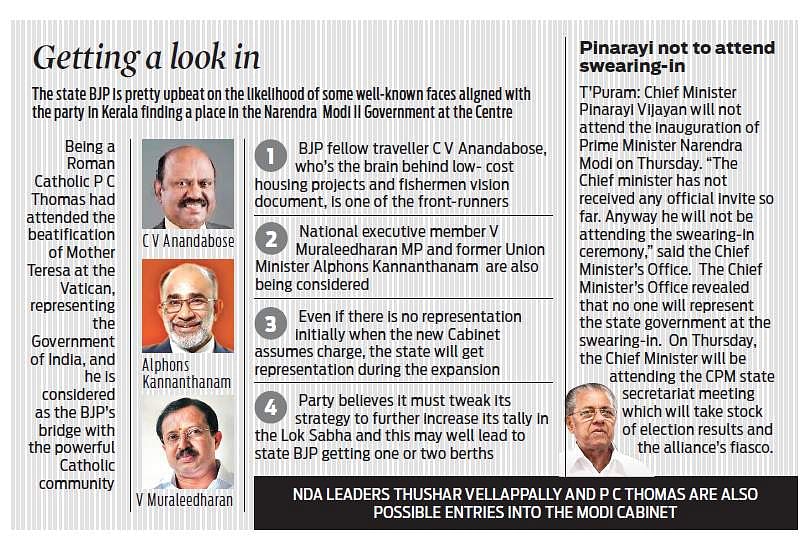 BJP leader and candidate from Thiruvananthapuram Lok Sabha constituency Kummanam Rajashekharan’s name is also under consideration as a possible entry into the Union Cabinet.BJP state president P S Sreedharan Pillai told Express, “Allocating Cabinet berths is the  Prime Minister’s prerogative and the state committee will be really happy if any of our leaders join the team.”Party sources told Express even if there is no representation initially when the new Cabinet assumes charge, the state will get representation in the expansion which is likely to take place in the immediate future.

NDA leaders Thushar Vellappally and P C Thomas are also possible entries into the Modi Cabinet.
Thushar is a backward class leader and this is the first time the BJP entered into a proper political alliance in the state with the BDJS headed by Thushar and backed by the SNDP which represents the Ezhava community. Thomas, on the other hand, is an old associate of the BJP and was Minister of State for Law and Justice in the Atal Behari Vajpayee Government of 1999-2004.

He was a giant killer winning the Muvattupuzha seat for the NDA in the 2004 general elections. Being a Roman Catholic he had attended the beatification of Mother Teresa in the Vatican representing the Government of India and was considered as the BJP’s bridge with the powerful Catholic community.
Additionally,  the NDA  has expanded its wings to West Bengal, Odisha and the North East and the party is now focused on making gains in the South.  Sunil Dheodhar,  party’s All India secretary, who meticulously planned the CPM rout in Tripura, has gone on the record stating the BJP is aiming to win 404 seats in 2024. The Congress had won this many seats in 1984 following Indira Gandhi’s assassination.

Stay up to date on all the latest Kerala news with The New Indian Express App. Download now
(Get the news that matters from New Indian Express on WhatsApp. Click this link and hit 'Click to Subscribe'. Follow the instructions after that.)
TAGS
Kummanam Rajasekharan Kerala BJP Kerala Narendra Modi