KOCHI:  This year’s monsoon has brought bountiful blessings to the state by ending its water woes, offering relief from the sizzling heat and bringing solace to farmers. However, it is the Kerala State Electricity Board (KSEB) which has more reasons to smile. The state received copious amounts of rainfall at regular intervals from August, which helped ensure more than sufficient storage in dams. The water-level in November is the highest-ever recorded. 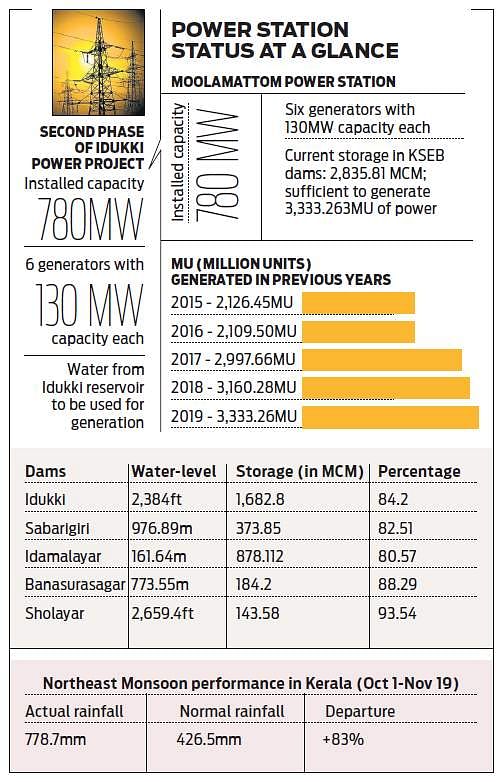 “As we have been receiving heavy rainfall at regular intervals, the water-level in dams have crossed 80 per cent, which is the maximum recorded in recent years. Even after facing a devastating flood last year, the water-level was much lower. Now we have enough storage to meet summer demand. Intermittent rain has helped keep the temperature hovering around 30 degree Celsius, which has reduced power consumption as well,” said KSEB chairman N S Pillai to TNIE.

With the weather remaining cool, the average consumption of power has decreased below 70 million units (MU). When it rains heavily, consumption dips to 65MU. If the temperature touches 35 degree Celsius, consumption will sore to 75MU. The state purchases around 45MU of power from various agencies to meet its daily demand. Reduced consumption has also helped KSEB undertake maintenance work of generation units. Currently, three generators of Idukki project have been switched-off for maintenance work.

750MW second phase of Idukki project
The next board meeting of KSEB is expected to give the green light for the `2,500 crore second phase expansion of Idukki hydel-power project. KSEB has been pushing for the project for a while now as it would help meet the huge demand during peak hours. With the government giving the go-ahead, KSEB has sought some clarifications regarding financial issues and if everything works out as expected, the next board meeting will clear the project.

The plan is to establish a a 780MW power house with six generators, each with an established capacity of 130MW. The board plans to avail a loan of `2,500 crore to complete the project. The plan is to use water from the Idukki reservoir for generation. Currently, water from Idukki dam is used for power generation at Moolamattom power station. This will help the board manage storage in the dam better during floods, said an officer.

Stay up to date on all the latest Kerala news with The New Indian Express App. Download now
(Get the news that matters from New Indian Express on WhatsApp. Click this link and hit 'Click to Subscribe'. Follow the instructions after that.)
TAGS
KSEB monsoon MM Mani Kerala rainfall Electricity Kerala dams

Nirbhaya: Verdict today on plea challenging dismissal of complaint for FIR against witness

Priyanka Gandhi hits out at Centre over the unemployment