The land belonged to five different units and presently is in possession of Joice George.

KOTTAYAM:  Finally, the state government has decided to take back the land in the illegal possession of former Idukki MP Joice George and his family members in Kottakkambur village in Idukki. Ending more than five-year-long legal proceedings, Devikulam Sub-Collector Renu Raj on Saturday issued orders cancelling the pattayams (title deeds) and entrusting Devikulam tahsildar to take over around 20 acres of land.

The land belonged to five different units and presently is in possession of Joice George (pattayam number 10/2001), his mother Mary (6/2001), wife Anoopa (11/2001), his brother Rajeev Jyothice George (8/2001) and another brother’s wife Jiss Justin George (3/2001). According to the sub-collector’s order, the pattayam of each unit was sanctioned illegally to five persons in Kottakkambur, which was later transferred to Joice and his family members by his father George of Paliath house, using a power of attorney. 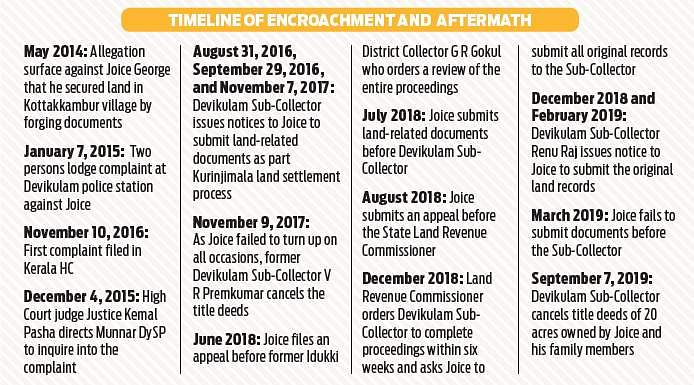 The sub-collector cited four major reasons for cancelling the pattayams and taking over the land. The first is that Joice and other title holders failed to appear in person with relevant documents for verification of land records.

Secondly, serious lapses were found in the assignment process as the original assignees were either not born or only less than 10 years old when the land was awarded to them by the government, which put the entire assignment process in shadow. Thirdly, pattayams were awarded to the assignees without convening land assignment committees and, finally, the area was marked as government ‘tarisu’ (barren) land in the resurvey fair field register of Kottakkambur village, which was prepared in 1970.

It was during the 2014 Lok Sabha elections that an allegation was levelled against Joice George that he forged documents to get the land in block number 58 of Kottakkambur village. As per the case, Joice’s father gifted the land to him and other family members, which was originally awarded to five Scheduled Tribe persons -- Lakshmi, Poongodi, Murukan, Veerammal and Balan.

In 2015, the government appointed Devikulam Sub-Collector as the settlement officer to verify all pattayams in Anchunadu region. “We have closed a long-pending proceeding by taking a final decision in the case of five pattayams. We will continue the verification of land records in the Anchunad areas as part of the settlement process for Kurinjimala sanctuary,” Renu Raj told Express.

when  skeletons tumbled  out
It was during the 2014 Lok Sabha elections that an allegation was levelled against Joice George that he forged documents to get the land in block number 58 of Kottakkambur village.

Now we are on Telegram too. Follow us for updates
TAGS
Joice George

Netflix names 'Bridgerton' as its 'biggest series ever'