As climate change rewrites narrative, Onam is no longer a harvest festival

It’s time to rewrite the story about Onam celebrations.

KOCHI: It’s time to rewrite the story about Onam celebrations. With climate change disturbing the monsoon pattern, Onam has ceased to be a harvest festival. Gone are the days when Kerala got into a festive mood with ‘ara’ (traditional granary) filled with paddy grains, ushering in the days of prosperity after Karkkidakom, the month when rain batters the state.

Kerala has ceased to be an agrarian society and it is with salary and bonus that the state celebrates the festival of prosperity. ‘Chingakoythu’, paddy harvest in the month of Chingam which marked the dawn of Onam, has become a thing of the past. This year, only 400 hectares of paddy were to be harvested in the state before Thiruvonam. Though paddy cultivation is on in 58,291 hectares across the state, harvesting begins only by the first week of October. If it was the torrential rain that marred the harvest last year, paddy cultivation was delayed this time due to the severe drought. 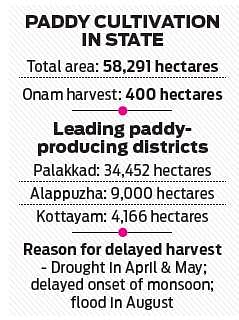 “Usually, we sow the seeds by the last week of April and the paddy will be ready for harvesting by the third week of August. But this time, we couldn’t prepare the field for sowing in April and May as there was no water.

The monsoon arrived on June 8 and the sowing started only in the last week of June. So, the harvesting begins only in October-November,” said Pandiyode Prabhakaran, a farmer in Palakkad district.As the flood in August destroyed crops in many parts of the state, many farmers had to replant after the floodwater receded.

“In another decade, paddy farming will cease to exist as around 90 per cent of farmers are more than 60 years old. The new generation is not keen to take up paddy cultivation. Another disturbing trend is leasing of paddy fields. The landowner leases the field for cultivation at the rate of `15,000 per acre and it is the workers’ collective that cultivates paddy,” said Prabhakaran.

“While paddy was cultivated thrice a year in the olden days, it has become a two-season or single-season cultivation now. Harvesting  starts only in October-November this time as the monsoon arrived late. Harvesting has begun only in small tracts in Thrissur, Palakkad and Malappuram. Land reclamation and erratic monsoon have changed the pattern of paddy cultivation in the state,” Agriculture Minister V S Sunil Kumar told Express.

As per information provided by the Agriculture Department, paddy harvesting is in progress in 400 hectares in Nedumangad (Thiruvananthapuram), Chelakkara (Thrissur), Pattambi (Palakkad) and some parts of Malappuram district.

Now we are on Telegram too. Follow us for updates
TAGS
Onam climate change