According to the order, posts with less than 16 hours of workload will cease to exist on the retirement, resignation or relieving of the current teachers.

THIRUVANANTHAPURAM: At a time when jobs in various sectors are likely to be severely hit in the aftermath of Covid-19, a government order on teaching posts has come as a bolt from the blue. The state government has issued a controversial order that would in effect result in a ban on the regular appointment of teachers in arts and science colleges for the next 10 years at least.

The Higher Education Department’s order aims to reduce the “huge financial burden” on the state on account of regular teaching posts created against a “lesser workload”. Besides creating uncertainty over the future of teachers appointed after 2018, the order also comes as a blow to hundreds of UGC-NET qualified youth aspiring for teaching jobs. The order stipulates that regular posts can be sanctioned only under a revised workload of 16 hours a week. Currently, a teacher can be appointed against a workload of nine hours per week. With this now raised to 16 hours a week, the number of teachers for a PG course, for instance, would come down from five to three.

Impact on teaching posts
The order on revised workload would impact around 2,000 teachers in arts and science colleges whose posts will now be termed as ‘excess’, said P N Harikumar, general secretary of the Left-affiliated All Kerala Private College Teachers’ Association (AKPCTA).

According to the order, posts with less than 16 hours of workload will cease to exist on the retirement, resignation or relieving of the current teachers. It also goes on to say that the services of guest lecturers alone will be permitted for subjects with a workload of less than 16 hours. Earlier, an hour of teaching for PG courses was considered as a workload of 1.5 hours. The new order has done away with that norm too on the pretext that the recent UGC regulations are silent about it. With most teachers serving in aided colleges having up to 10 years of service remaining, no new regular posts will be created for the next decade at least.

The Nair Service Society  (NSS) which administers around 15 aided arts and science colleges in the state has also decried the move. “Issuing such an order during this hour of crisis, when stakeholders don’t have the option of voicing dissent, is deplorable,” NSS General Secretary G Sukumaran Nair said. “The government should withdraw the order and initiate discussions with all stakeholders.” 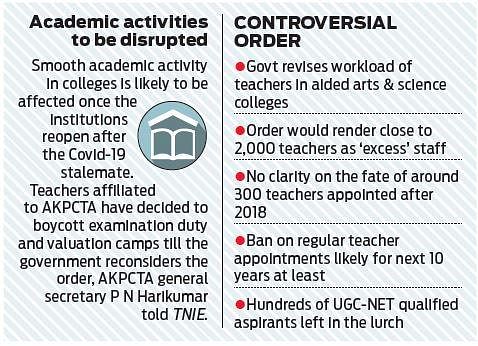