Only two test positive for COVID-19 in Kerala, 36 recover on ‘a day of much relief and hope’

Two districts, Kottayam and Idukki, have no active cases.

THIRUVANANTHAPURAM:  Easter Sunday brought much relief to Kerala. In what could be another indication of the state flattening the curve of Coronavirus infection, only two people tested positive for Covid-19 on Sunday. 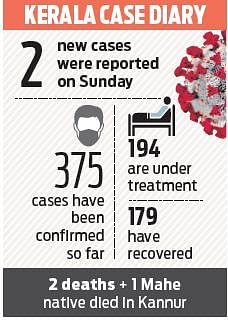 One person each from Kannur and Pathanamthitta tested positive for the virus, taking the tally of active cases in the state to 194. Commenting on the number of recovered patients, Health Minister K K Shailaja said it was “a day of much relief and hope.”

A Health Department official said it was after a long gap that less than five positive cases were reported in the state.

“The lowest number of cases — one — was reported on March 19. In the past five days, the number of people under observation in the state has come down,” said the officer.

Of the 36 recovered patients, the highest, 28, were from Kasaragod.

Six people from Malappuram and one person each from Kozhikode and Idukki also recovered.  At present, 1,16,941 people are under surveillance. Of them, 1,16,125 are in home quarantine, while 816 are in hospitals. On Sunday, 176 persons were admitted.