The state government has brought in certain relaxations in non-hotspot regions from April 20 as per the Union government directives.

THIRUVANANTHAPURAM: The state government has brought in certain relaxations in non-hotspot regions from April 20 as per the Union government directives. Work will be permitted in construction and agriculture sectors, adhering to the central directives. 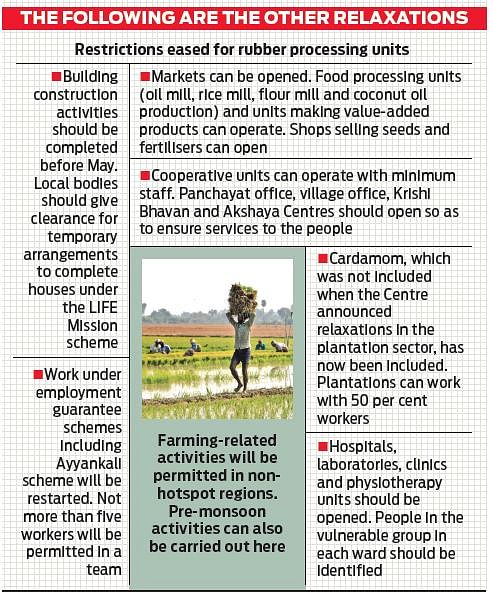 According to the government decision, work in the construction sector will be restarted. However, the workers should follow physical distancing and their health checkups have been made mandatory. This will be the responsibility of the employer.

Work will also begin in the industrial sector including coir, cashew nut, handloom, beedi and khadi sectors. Workers should be allowed through specific entry points only. Managements should ensure that the workers are not suffering from any health issues. Vehicles should be provided for workers. Also, those establishments with many workers should operate on a shift basis with less than 50 per cent of workers at a time.

A day will be allotted for cleaning centres/shops which could only resume functioning after May 3
Strict social distancing and other safety precautions must be ensured
Establishments should use only minimum workforce for its operations
No person with symptoms (fever/sore throat/common cold and others) should be asked to work
Local bodies to come out with a plan for disinfecting and waste management in each ward
Before resuming the functioning of offices and commercial establishments, such centres will have to be disinfected and ensure cleanliness of the surroundings
The scope of using migrant labourers for restoration and rejuvenation of water bodies will have to be explored by local bodies
Migrant labourers’ services could also be used for completing the construction of houses under the LIFE Mission

Stay up to date on all the latest Kerala news with The New Indian Express App. Download now
TAGS
COVID 19 hotspots Kerala Coronavirus