Till the other day, the northernmost district of Kasaragod was the vulnerable spot in the fight against Covid-19 in the state.

THIRUVANANTHAPURAM: Till the other day, the northernmost district of Kasaragod was the vulnerable spot in the fight against Covid-19 in the state. But on Saturday, the district won the appreciation of the Union Health Ministry for its effective containment plan implementation.The district has also set the record as the first district in India where more than hundred Covid positive patients have been cured. At 68 per cent, the district also has the best discharge rate among all districts with 100 or more cases, says the Kerala Government Medical Officers’ Association. Of the 168 positive cases reported in the district, 115 patients have recovered, with no death. 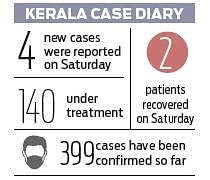 Joint Secretary of Health Ministry Lav Agarwal, during his press briefing, said all other districts in the country should take Kasaragod as a model in dealing with covid.“Kasaragod used drones for surveillance and employed GPS to good effect for tracking people on home quarantine. It also did aggressive testing,” said Agarwal. “The ‘break the chain’ campaign was carried out in an effective manner and a hundred percent house-to-house survey was also carried out in the district,” he said.

Kasaragod Collector D Sajith Babu  said the district had special strategies to bring the situation under control. “It implemented strict measures, including restricting movement of people even before the lockdown declaration. Also, it was decided to act tough against the violators. Tactics like social pressurising and public shaming were used to good effect for,”  he said.

Stay up to date on all the latest Kerala news with The New Indian Express App. Download now
TAGS
Kasaragod Kerala Coronavirus COVID 19