KOCHI: Considering the possibility of Covid-19 transmission among wild animals, the Kerala Forest department has launched a drive to monitor the health of tigers and monkeys in forests. The move comes in the wake of an incident wherein a tiger contracted the virus in a US zoo recently. Nearly 20 cameras have been installed around water bodies in Aralam and Wayanad wildlife sanctuaries for the purpose. The department, with the aid of as many as 400 cameras, is also monitoring the footage inside forests under Periyar Tiger Reserve.

“The National Tiger Conservation Authority has issued a direction to monitor the health of tigers in the backdrop of the incident at Bronx Zoo in New York. A tiger spends more time in water whenever its body temperature increases, which is why we have installed cameras around water bodies. If a tiger is sick, we will tranquillize it and provide treatment. We will also send the swabs to the labs to confirm the infection,” said Chief Conservator of Forests (CCF-wildlife northern region) B N Anjan Kumar. The forest department, according to officials, is also tracking the movement of wild animals in forests under the Periyar Tiger Reserve. 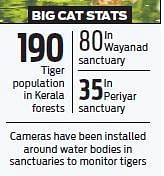 “The chance of wild animals contracting the virus is low as there is no human activity. Trekking and other activities have been stopped in view of the lock down. However, there is a possibility of transmission among monkeys at tourism spots since they have more proximity to humans. For this, we have deployed watchers to monitor the monkeys around tourism spots,” said Periyar East deputy director Silpa V Kumar. Responding to complaints regarding wild animals destroying crops in the forest fringe areas in Wayanad, CCF Anjan Kumar said there was no increase in incidents of wild elephants straying into human habitations.

“After receiving these complaints, we had collected the informations regarding wild animals entering human habitations,” he said. However, what they found was that there has been a slight decline in such incidents. “In 2019, while the 49 incidents were reported between March 25 to April 5, this year only 46 cases were reported during the same period,” he further added.