Around 10.30am on Sunday, a police jeep and an ambulance pulled over in front of the house of Abdul Kareem Anthuman, 37, at Kottikulam.

KASARAGOD: Around 10.30am on Sunday, a police jeep and an ambulance pulled over in front of the house of Abdul Kareem Anthuman, 37, at Kottikulam. The house on a one-acre plot was his quarantine centre for the past 32 days. Before he landed at Calicut International Airport from Dubai on March 19, he sent his aged parents to his sister’s house, and wife and child to her house. His younger brother came three times a day to deliver food. The food was left under a tree and only after he leaves, would Kareem approach the food.

During these days, his samples tested negative for COVID-19, but Kareem never dropped his guard. So, when officers came knocking at his door on Sunday, he was surprised. “They forced me into the ambulance and took me away,” he said on phone. He is now locked in Deira City Lodge in Kasaragod town. His crime: he flouted quarantine rules. How did the police find out? CovidSafety, an Android GPS app, they installed on his phone pinged signals from two towers in the locality. 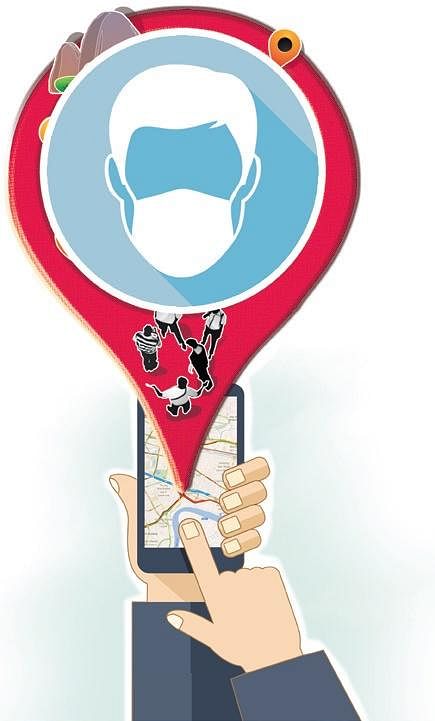 It did not matter that the government-prescribed quarantine period of 28 days end on April 16 for Kareem. “They were not ready to hear him out. They said it was the order of the IG (Vijay Sakhare),” he said. Dr Krithika Deepak, a postgraduate student in ENT, returned from Dubai on March 13, and since then she has been in quarantine in the house of her uncle Jathindran K V. “A month after the quarantine period ended, an officer from Chandera police phone to say that I ventured out of the house,” she said. “The officer was rude and threatened to file a case against me,” she said.

The young doctor said she was upset because she did not step out despite her quarantine period got over.  Like Kareem, she was not tested positive. But the police let her off with a warning.But many others in the district are not lucky. The police were using the “bugged app” to harass the people of Kasaragod, said district panchayat president A G C Basheer. “In Chandera police station alone, 45 such persons are booked. The police arrived at the conclusion using the app,” he said. With high tower density, mobile phones can pick up signals from multiple towers in the same locality, he said.

Abdul Zameel, 25, a COVID patient who recovered, shared a video with TNIE to show how erratic the app behaved. In 50 seconds, the GPS cursor moved to three places within a radius of 1km, five times. “How can I make a round in less than one minute to these many places,” he said. Yet, Zameel has been picked up by the police and locked up in Century Hotel in Kasaragod. His case is another example of police excesses, said Kasaragod MLA N A Nellikkunnu.

He shared his house at Melparamba with 10 family members: his parents, maternal grandmother (62), his two maternal uncles, an aunt, her two children, aged seven and four years, and his younger brother and schoolgoing sister. He never got out of the room.  On March 27, he tested positive and was shifted to the General Hospital. After 18 days in the hospital, his sample tested negative on April 13.  On April 9, police forced him to install the GPS tracking app on his phone. “On April 10, 12 and 13, when I was in the hospital, the app showed me roaming the town,” he said. After reaching home, though he was confined to his room, the police called and said he was roaming around, said his mother Zaibunisa.

On April 16, the police came and took him away, said his father Abdul Zameel. “My son is the only case in our ward. Yet he is condemned in a hotel room because of the app. It is not an app but an ‘aap’ (pest),” he said. Basheer said Kasaragod was able to successfully contain Covid because of the active cooperation of the people. Nellikkunnu wrote to the chief minister saying there could be a bug in the app. “It should be withdrawn and reviewed,” he said. The Health Department officials said the police look into the history of the patients and not just the app feedback. “The DMO has spoken to the IG to release patients who have completed the quarantine period,” said an official. “The police are responding positively,” he said. Meanwhile, inspector general Vijaya Sakhare -- in charge of the law and order in Kasaragod -- did not respond to calls made to his phone.

Now we are on Telegram too. Follow us for updates
TAGS
COVID Kerala police GPS tracking app coronavirus