With roti-dal and care for kin back home, Kerala wins migrants’ trust

THIRUVANANTHAPURAM: In the initial days of the lockdown, the prime concern of the state government while dealing with the Covid-19 pandemic was how to handle its huge workforce from other states, who earned their daily bread by mostly doing blue-collar jobs. Massive unrest among them was potent enough to dent the government’s action plan against the pandemic.

However, it was a slew of holistic measures such as reaching out to the labourers, setting up avenues for their recreation and most importantly, arranging medical assistance to the needy family members of the workers back home in a bid to earn their trust, that helped the state avert a massive agitation from brewing among migrant workers. Food was always going to be a problem. 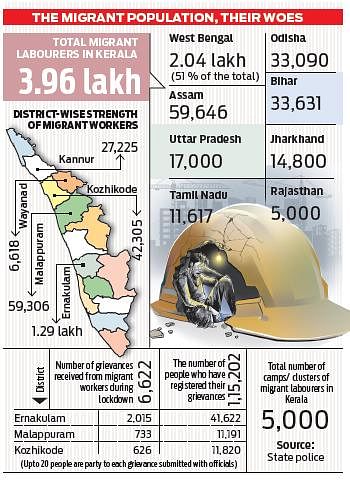 To deal with the issue, the government set up community kitchens. But there was another hiccup as most of the migrant workers preferred their local cuisine to Kerala food being provided in the kitchens. They preferred roti, dal and their local variety of rice. This issue was resolved after the resenting workers were allowed to run their own version of community kitchen for which the essentials were provided by the authorities.

In fact, the authorities promoted the workers to run their own kitchen for a reason. Cooking food for a large group was a time-consuming process and the officials felt that it would wean them away from devoting time to fake messages being circulated on social media platforms. Thiruvananthapuram Police Range DIG Sanjay Kumar Gurudin, who is the nodal officer for the welfare of the migrant labourers, said the effort paid dividends as the workers prepared their own dishes and they did not spend too much on social media platforms.

“There were a lot of rumours being circulated on numerous WhatsApp groups that they were members of. We intervened and began sending authentic information on those groups to counter the fake narratives,” he added. Sanjay said most of the workers were worried about their safety and their families’ back home and wanted to return soon. The officials convinced them that transportation has been suspended all over the country and travelling is not possible.

“Once they understood they will have to remain isolated for a month if they travel, many dropped their demand,” Sanjay said. The officials also got in touch with their family members and convinced them to persuade their family members in Kerala to stay put. To drive home the point that the state is interested in their wellbeing, Sanjay got in touch with the respective nodal officers of the eastern states and arranged life-saving medicines for some of the family members of the workers. Issues of language barrier were solved by fielding 82 paramilitary people and numerous Home Guards having expertise in various languages, among the workers.

Sources said the biggest challenge they had faced was to make the workers stay indoors. For that, the cops with the help of NGOs and philanthropists donated television sets, carrom boards and playing cards to the camps for recreation. Despite these measures, a large number of workers was under immense stress and many of them were having suicidal thoughts. Around 100 counsellors were arranged from Tata Institute of Social Science (TISS) to provide psychological support to the workers.