Govt likely to drop cases filed based on ‘bugged app’

TNIE had published a detailed report on how the police’s GPS tracking app appeared bugged.

KASARGOD: The government is likely to drop all FIRs registered for alleged quarantine violation, based solely on inputs from the GPS tracking app of the police, said Minister for Revenue and Disaster Management E Chandrasekharan.Speaking to TNIE on Saturday, the minister said he has written to the chief minister to review the FIRs. “Chances are the FIRs may be dropped,” he said.

He said he referred to the report of TNIE published on April 20 ‘GPS tracking app of police backfires, puts Covid patients in a spot’ in his communication with the chief minister.Chandrasekharan said several technical experts had pointed out that the Covid Safety app was picking up signals from several mobile towers in the vicinity even when the person in quarantine was not moving out of his house. “In such circumstances, going ahead with FIR will create misunderstanding among people,” he said. 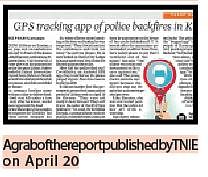 TNIE had published a detailed report on how the police’s GPS tracking app appeared bugged. In one instance, the location cursor pinged off three towers five times in 50 seconds.“If the tower location of a person from Kanhangad is shown as Manjeshwar we can believe he has travelled. But here, it is all in the same location,” he said.

The minister said he had raised the issue of registering FIRs based on inputs from the app in a review meeting attended by the chief minister and state police chief Loknath Behera. “We were made to understand by the officer that it is not a big issue and such FIRs will be not registered. But what’s the point of those words if FIRs are registered and cases sent to court,” he said.