Air India Express and airports get ready to welcome expats

While the budget airline informs the state government that its aircraft can bring in 5,000 people at one go, Kannur airport discusses screening and quarantine procedures with officials

T’PURAM/KANNUR: As the state is making preparations for bringing back non-resident Keralites stranded in foreign countries because of the Covid-19 spread to the state, the Kochi-headquartered Air India Express, as well as airports, have expressed their readiness for evacuation. While Kannur International Airport Ltd MD V Thulasidas has said the airport is ready to receive the people from abroad, Air India Express has communicated to the state government that its aircraft are ready to take off if the Centre gives the nod for evacuation as suggested by the state, according to government sources.

The budget airline’s parent company, Air India, in fact, has a history of evacuating people from Beirut during the Lebanon crisis and Amman during the Gulf War. Air India Express had recently switched its passenger aircraft to cargo flights, after the DGCA nod, to meet its operational revenue. The last time Air India took off for evacuation was during the time of Covid-19 itself in January this year for bringing back Indians from Wuhan in China and Rome in Italy. 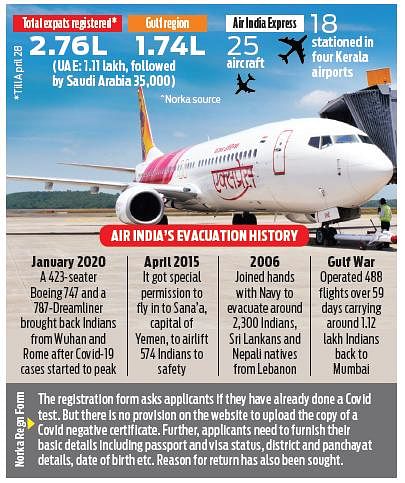 “As many as 18 aircraft of Air India Express are now stationed in the four airports in the state, which can be pressed into service anytime if the Centre gives the green signal for evacuation,” a source said. The airline, which operated 28 arrivals and 28 departures from the four airports in the state daily before the lockdown was declared, can bring around 5,000 passengers from the Gulf at one go.

Plans at Kannur airport
The Kannur airport authorities, meanwhile, held a meeting with revenue and health officials on Monday to discuss about the arrangements to be made at the airport. Three airline companies have expressed their willingness to start their operations to the UAE, said Thulasidas. The airlines have been asked to schedule their operations according to the directions from the Central government after the lockdown restrictions are lifted.

Those who show no symptoms would be sent to their houses with quarantine instructions. They will have to spend 14 days in home isolation. Police and health workers would be entrusted with monitoring their movements. Those who land at the airport would be categorised based on their district and taluk. The details of people would be collected at the local body level and scrutinised at the district level.