All NRI returnees may be put in separate rooms or halls

Health dept has sent a note to its officers in Ernakulam, which is expected to receive the bulk of the arrivals, to identify and report back the number of beds and bath-attached rooms available

KOCHI: As Kerala prepares to receive the Gulf returnees -- over 3.2 lakh people have evinced their keenness to return home till Wednesday — behind the scenes work is in progress to quarantine all passengers arriving at various airports in the state at various rooms and community halls to avoid the risk of them jumping home quarantine. The health department on Wednesday sent a note to its officers in Ernakulam, which is expected to receive the bulk of the Gulf arrivals via the Kochi airport at Nedumbassery, to identify and report back the number of beds and bath-attached rooms available.

“We were asked to report back today (Wednesday) itself on all the facilities available,” said a health department official, who asked not to be named. The plan, he said, may be to find out if there is enough capacity to quarantine all the passengers in pre-identified community halls and auditoriums, college hostels and similar facilities, in addition to beds available in government and private medical colleges.Though the PWD department too had collected the details, now the government wants an updated figure, the official said. 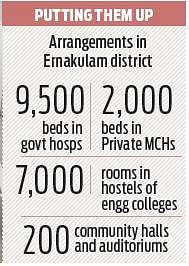 In Ernakulam alone, he said the department has identified 9,500 beds in government hospitals, another 2,000 in private medical colleges such as Kolencherry Medical College; 7,000 rooms in hostels in engineering colleges and similar institutions. Another 200 community halls and auditoriums have also been identified by the department, he said. Cochin airport sees about 15,000 passenger arrivals daily during peak season.

“But, under these circumstances, we expect a maximum of about 6,000-8,000 passengers daily. And, we also do not foresee the entire number of people registered with the government to return immediately,” said an airport official. While those with slight temperature and other Covid symptoms will be quarantined in bath-attached rooms till the swab test results are out, others will be placed in community halls and auditoriums, where the beds will be arranged.

“We will have to arrange beds there,” the officer said. There is the  risk of community spread in this strategy too, he admitted. “Suppose if an asymptomatic person later turns out to be Covid+, we will have to quarantine all others in the same community hall or auditorium separately. By that time, there are also chances that they may have gone outside and interacted with others. But still, this is a better strategy than allowing passengers to remain in home quarantine,” he said.

Vibha Santosh, faculty, internal medicine, Government Medical College, Ernakulam, said the hospital can easily accommodate about 400 patients at a stretch, if the need arises. “We have not been told anything as yet,” she said. “It’s a workable strategy if passengers with high temperature or other symptoms, are quarantined in separate rooms till the swab results are out. If they test positive for Covid, they can be brought to the hospital. We have enough capacity for now,” she said.

Stay up to date on all the latest Kerala news with The New Indian Express App. Download now
TAGS
Kerala NRKs Gulf returnees