Amid economic slowdown in India, Kerala records 7.5 per cent growth

The state’s growth rate is higher than the all-India GDP growth rate of 6.8 pc, says the Economic Review 2019 tabled in the assembly on Thursday.

The manufacturing sector too sprung a surprise by registering 11.2 per cent growth compared to 3.7 per cent in the previous year.

NRI remittance, which constitutes 38.5 per cent of the total bank deposits, increased by 11.83 per cent in FY 19 as against the previous fiscal.

The growth in domestic deposits, which constitute 61.5 per cent of the total deposits, was 9.45 per cent.

State’s taxes formed the biggest contributor to the total revenue receipts, 54.54 per cent.

Agriculture recorded a negative 0.5 per cent growth, a worrying dip from 1.7 per cent in the previous fiscal. The review blamed the floods for this.

But there is good news from the fisheries sector. Fish production, which had been declining since 2015-16, witnessed a significant increase in FY 19, 8.01 lakh tonnes. Kerala had 133.34 lakh motor vehicles as on March 2019.

The growth so far

“The growth in our industrial sector is indicative of the changing body language of Kerala,” said Finance Minister Thomas Isaac.

Speaking to reporters on Thursday, the minister stated that this was a testament to the state economy’s power to overcome any adverse situation.

Hundreds of haemophilia patients in the state pin their hopes on the 2020-21 budget.

They expect that their repeated demands for allocating a specified amount for treatment and medicine will come as a budgetary announcement this time. 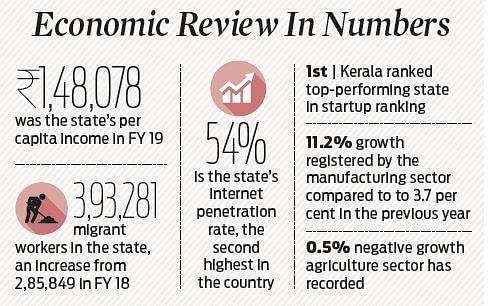