THIRUVANANTHAPURAM: Opposition UDF has demanded an investigation by the CBI and NIA into the alleged irregularities and corruption charges, pointed out in the CAG report, against state police chief Loknath Behera. While there should be a CBI probe into the corruption charges against the police chief, an NIA probe is also necessary to unearth the missing of rifles and cartridges, Opposition leader Ramesh Chennithala has said.

“The CAG report has upheld the allegations raised by P T Thomas, MLA, in the assembly against the state police chief. Missing of rifles that can fire 600-650 bullets in a minute from the AR Camp is a crime of serious nature. Using these rifles, thousands can be killed. Since it is an issue that could pose a threat to national security, NIA investigation is needed,” Chennithala said. Behera should be urgently kept away from the post of state police chief, he said.

Chennithala pointed out that the CAG report has pointed out purchases without administrative sanction and purchases against administrative sanction in addition to violation of store purchase manuals. Since Behera is one of the senior-most IPS officers and the irregularities related to Central funds, investigation by a state machinery like Vigilance will not be effective. That’s why a CBI probe is needed, he said.
Despite warnings by the Legislative Assembly’s Public Accounts Committee, Home Department repeated the irregularities. The DGP’s action amounts to serious violation of norms set by the CVC (Central Vigilance Commissioner), Chennithala said. 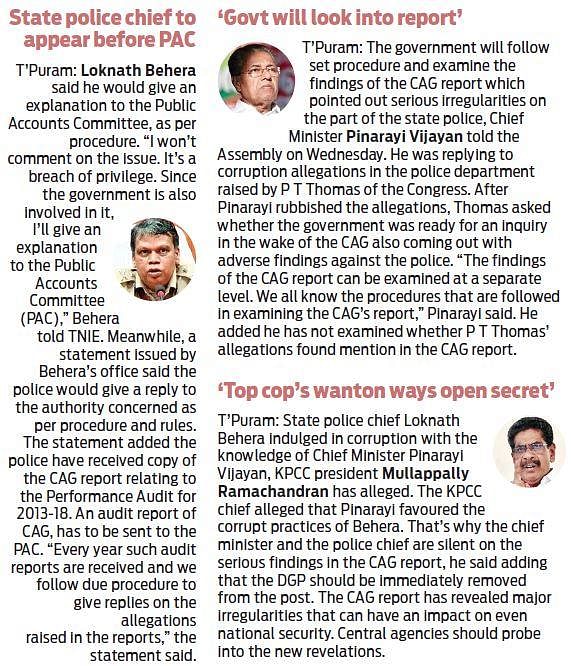 Stay up to date on all the latest Kerala news with The New Indian Express App. Download now
(Get the news that matters from New Indian Express on WhatsApp. Click this link and hit 'Click to Subscribe'. Follow the instructions after that.)
TAGS
Loknath Behera